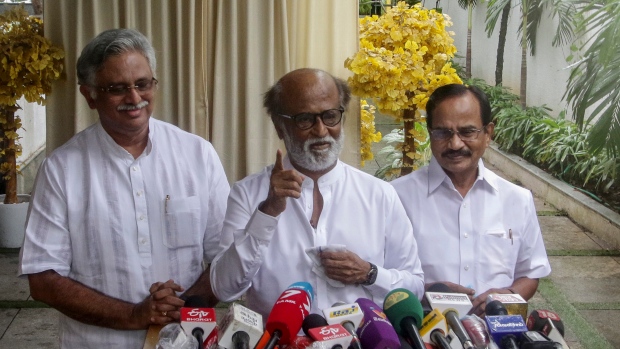 Indian movie superstar Rajinikanth, center, gestures as he addresses a press conference outside his residence in Chennai, India, Thursday, Dec. 3, 2020. Rajinikanth said Thursday he plans to launch his own political party in southern India in January, ending years of speculation by millions of his fans on his political future. (AP Photo/R.Parthibhan)

NEW DELHI - Indian movie superstar Rajinikanth has announced plans to launch his own political party in southern India in January, ending years of speculation by millions of his fans on his political future.

He said in a tweet that he will make an announcement on December 31st -- apparently in relation to legislative elections in Tamil Nadu state expected around June next year.

He started taking an active part in politics in 2017.

The 69-year-old Rajinikanth is one of India's most popular stars.

He's made more than 175 films since 1975, mostly in the Tamil and Telugu languages.

He tweets that in the upcoming Assembly elections, “the emergence of spiritual politics will happen for sure -- A wonder will happen.”

His political prospects appear bright following a vacuum created by the deaths of Jayaram Jayalalithaa, an actor-turned politician with the governing party in the state, and Muthuvel Karunanidhi, the leader of the opposition Dravida Munnetra Kazhagam party.

He started in small roles as a villain in Tamil cinema and worked his way up, landing roles in Bollywood, the Hindi-language film industry based in Mumbai.