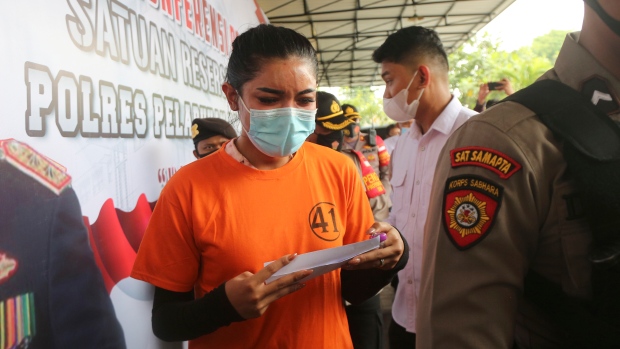 Instagram celebrity Millen Cyrus, center, is escorted by Indonesian police as she is presented to the media during a press conference in Jakarta, Indonesia, Monday, Nov. 23, 2020. Indonesian Police moved the trans woman Instagram celebrity to a special cell after the public outrage on social medias related to her initial placement at male detention cell after the police arrested her for drug abuse. (AP Photo)

JAKARTA, Indonesia - Indonesian police have moved a female transgender Instagram celebrity, Millen Cyrus, to a special cell following public outrage over her initial placement in a male detention cell after she was arrested as a suspect in a drug case.

“As for her status on her ID, she is a male, and we do not have a transgender status here. So to avoid something we do not want, we placed her in a special cell by herself. That is our policy on it,” Jakarta Police spokesperson Yusri Yunus said Friday.

Cyrus, 21, whose birth name is Muhammad Millendaru Prakasa, has more than 1 million followers on Instagram. Her account of her experiences as a transgender woman on YouTube has been viewed more than 6 million times.

She was arrested on Sunday in a police raid on a hotel room in which 0.36 grams of crystal methamphetamine was found. Police announced then that she had been placed in the men's detention cell at Tanjung Priok Port Police Station, following her identity on her ID card.

That triggered criticism from rights groups and on social media in the world's most populous Muslim nation.

Yunus said police are still determining whether she was a drug user or dealer.

The group Human Rights Watch said moving Cyrus to a special cell was a good decision by police.

“Most trans women are imprisoned in male prisons, so they experience sexual harassment there,” said Andreas Harsono, the group's senior researcher in Indonesia.

“The simplest one is verbal abuse. Some physical abuse happens too. It is not in the cell at the prison but in closed areas,” Harsono said.

He said more than 2,000 LGBT people have been arrested in Indonesia because of their sexual orientation since 2014.

LGBT communities have recently come under siege, although homosexuality is not illegal, except in conservative Aceh province.

In February, some members of the House of Representatives proposed a bill that would define homosexuality as deviant and require lesbian, gay, bisexual and transgender people to report to authorities for rehabilitation.