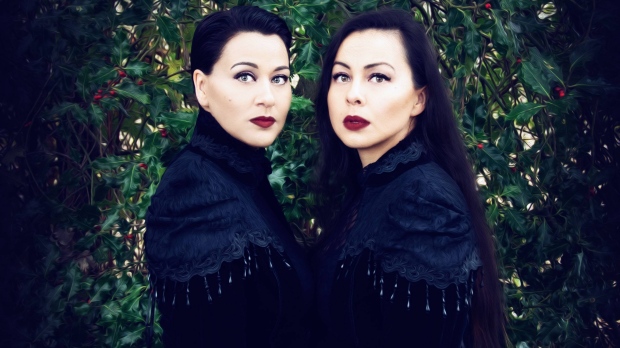 The musical duo PIQSIQ, Inuksuk Mackay and Tiffany Ayalik, pose in this undated handout photo. The musical duo PIQSIQ is forging their own holiday tradition by covering Christmas carols in the style of Inuit throat-singing. Tiffany Ayalik and Inuksuk Mackay say "Quviasugvik: In Search of Harmony" evokes the mixed emotions the season can bring. THE CANADIAN PRESS/HO, PIQSIQ,

Christmas can be complicated for the Inuit musical duo PIQSIQ.

Tiffany Ayalik and Inuksuk Mackay have fond childhood memories of travelling from Northwest Territories to Nunavut for communal Christmas festivities. But as they grew older, the Yellowknife-raised sisters came to associate the Christian holiday with the colonial suppression of Inuit culture, opting to instead celebrate the winter solstice.

When children entered the picture, Ayalik and Mackay struggled to find a balance between acknowledging the suffering of their ancestors, while allowing the next generation to join in the Christmas merriment.

Now, PIQSIQ is forging their own holiday tradition by covering Christmas carols in the style of Inuit throat-singing.

"Quviasugvik: In Search of Harmony" features holiday standards such as "Carol of the Bells" set to the guttural thrum of throat-singing, which involves using breathing techniques to produce an array of vocal sounds.

Ayalik said these choral arrangements amplify the haunting undertones in many Christmas tunes, giving the album a dark edge that felt like a "fuller expression of the season."

The sisters covered hymns including "What Child Is This" and "God Rest Ye Merry Gentlemen" to evoke what Christmas must have felt like for Indigenous children in residential schools celebrating the holiday for the first time after being uprooted from their communities.

"We layered a lot of that confusion and longing and wanting to be home within the music," said Ayalik. "I think that's something that people also feel in non-Indigenous contexts."

PIQSIQ also wanted to conjure the joy of Christmas in an Indigenous context with their original composition, "Qimuksiq: Dogsled Ride."

Even the album's "cheeky" title points to the emotional tumult the holidays can bring, said Mackay. "Quviasugvik" is the Inuktitut word for "Christmas time," but the direct translation is closer to "happy time," when that isn't the case for many people, she said.

Ayalik said PIQSIQ has been inundated with messages from listeners who say the album captures their mixed feelings about Christmas.

"Even singing in the studio, there were a couple of parts that I had to like step away and have a little cry, because you're accessing those feelings at that time, and there's a lot of pain there," said Ayalik.

"With the (album) release, I'm feeling that as well. I had so many mixed emotions (Monday) of complete elation, relief, my own sort of mourning and grieving for various reasons -- and all wrapped up in Christmas."

While the notion of the "true meaning of Christmas" often gets bandied about this time of year, Mackay said the album speaks to how the holiday can resonate differently across families, communities and cultures.

"This was our way as sisters to navigate this difficult time together," she said. "It's our hope that it will inspire others to have the courage and the kindness towards themselves to navigate their things in their own ways as well."

"Quviasugvik: In Search of Harmony" is available on the digital music platform Bandcamp.

This report by The Canadian Press was first published on Nov. 28, 2019.