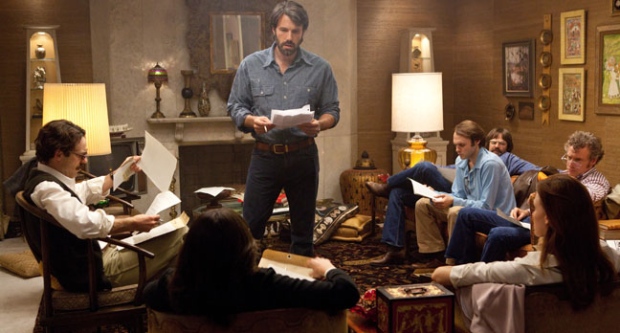 TEHRAN, Iran -- Iran is planning to sue Hollywood over the Oscar-winning "Argo" because of the movie's allegedly "unrealistic portrayal" of the country, Iranian media reported Tuesday.

Several news outlets, including the pro-reform Shargh daily, said French lawyer Isabelle Coutant-Peyre is in Iran for talks with officials over how and where to file the lawsuit. She is also the lawyer for notorious Venezuelan-born terrorist Ilich Ramirez Sanchez, known as Carlos the Jackal.

Following the 1979 attack on the U.S. Embassy in Tehran, 52 Americans were held hostage for 444 days, but six embassy staffers were sheltered by the Canadian ambassador. Their escape, using a fake movie as a cover story, is recounted in "Argo."

The lawyer told the semi-official Mehr news agency that she will start a campaign to show that Argo is a lie, while pressing to stop distribution of the movie.

"We will be able to block distributors of the movie, force them to apologize and challenge them to confess that the movie is nothing but a sheer lie," the lawyer said.

Though the movie isn't showing in any Iranian theatres, many Iranians have seen it on bootleg DVDs and it set off a spirited debate that exposed a generational divide. Iranians who took part in the 1979 Islamic Revolution picked apart the portrayals of Tehran at the time but those too young to recall the events were eager for a different view on what had happened.

The decision on the lawsuit came after a group of Iranian cultural officials and movie critics screened the film in a closed audience in a Tehran theatre late Monday.

The gathering, titled "The Hoax of Hollywood," discussed various legal aspects of filing a lawsuit, media reports said, without providing details. It remains unclear what specific charges Iran could raise and what court Tehran could turn to if the action goes ahead.

Those at the meeting dismissed "Argo" as a "violation of international cultural norms." A statement issued after the gathering said that "awarding an anti-Iran movie is a propaganda attack against our nation and entire humanity."

The statement did not clarify how the movie was allegedly unrealistic, but officials have accused "Argo" of depicting Iranians as "too violent."

They have also said the movie's director did not refer to other documentaries on the embassy storming or discuss reasons for the crisis, which included simmering resentment against the United States for a CIA-aided counter-coup in 1953 that toppled democratically elected Prime Minister Mohammad Mossadegh and restored the pro-Western monarchy in Iran.

This was not the first time Iran has claimed that Hollywood has pushed a distorted picture of the country.

In 2009, Iran demanded an apology from a team of visiting Hollywood actors and movie industry officials, including Annette Bening, saying films such as "300" and "The Wrestler" were "insulting" to Iranians.

In 2007, the hit American movie "300" angered Iranians who said the Greeks-versus-Persians action flick insults their ancient culture and provokes animosity against Iran.

The 1991 film "Not Without My Daughter" -- the true story of an American women fleeing Iran with her young daughter, angered Iranians who accused it of casting Iranians as dirty, boorish and cruel, obsessed with Islam and misogynist attitudes toward women.

Iran's state-run film industry boycotted this year's Oscars in the wake of an Internet video clip made in the U.S. denigrating the Prophet Muhammad that set off protests across the Muslim world.

The affair wasn't related to "Argo."