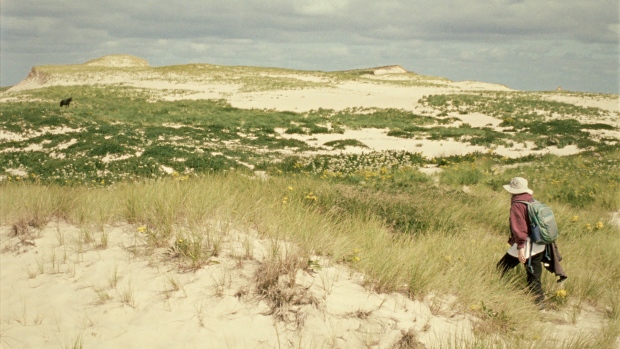 An image from the film "Geographies of Solitude" is shown in this undated handout photo. Jacquelyn Mills and Zaynê Akyol have won top Canadian honours at the 2022 Hot Docs Film Festival. THE CANADIAN PRESS/HO-Hot Docs

Her film, “Geographies of Solitude,” chronicles the life's work of environmentalist Zoe Lucas, the only full-time inhabitant on Sable Island.

Mills also received the Earl A. Glick emerging Canadian filmmaker award, which is given to a local filmmaker whose film in competition is their first or second feature-length film.

In a statement, the jury praised the film's “strongly crafted and arresting visual and aural storytelling.”

Iranian Canadian filmmaker Avazeh Shahnavaz, meanwhile, received the $5,000 Lindalee Tracey Award, which honours an emerging Canadian filmmaker with a strong point of view, sense of social justice and sense of humour,. She also received $5,000 in post-production services and a hand-blown glass sculpture by artist Andrew Kuntz.

Outside of the Canadian categories, “Blue Island” director Chan Tze Woon received the $10,000 best international feature documentary award for his “evocative” protest film, while the special jury prize went to “The Wind Blows the Border” directors Laura Faerman and Marina Weis for their “subtle and bold” look at two sides of a land conflict in Brazil.

The award for emerging international filmmaker, along with a $3,000 cash prize, was awarded to director Bogna Kowalczyk for “Boylesque,” a portrait of an openly gay 82-year-old Polish man living out loud in his homophobic country.

The festival comes to a close on May 8, when the Rogers Audience Award for best Canadian documentary will be announced at a special encore screening in Toronto.