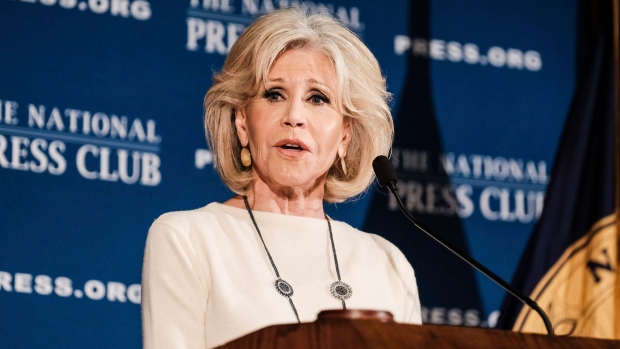 Actress and activist Jane Fonda speaks at an event at the National Press Club, Friday, Dec. 17, 2019 in Washington. (AP Photo/Michael A. McCoy)

Fonda will receive the Cecil B. DeMille Award during the 78th annual awards ceremony on February 28th.

A member of one of America's most distinguished acting families, Fonda has captivated and inspired fans along with critics in such films as “Klute” and “Coming Home.”

Fonda, the daughter of Oscar winner Henry Fonda and sister of Peter Fonda, made an impact off-screen by creating organizations to support women's equality and prevent teen pregnancy and improve adolescent health.

She released a workout video in 1982 and was active on behalf of liberal political causes.

In a statement, the head of the Hollywood Foreign Press Association says the DeMille Award is given annually to an “individual who has made an incredible impact on the world of entertainment.”

Nominations for the upcoming Globes show are scheduled to be announced February 3rd.

The 83-year-old Fonda has been nominated for five Academy Awards and won two for the thriller “Klute” and the compassionate anti-war drama “Coming Home.”

She had other prominent films including “The China Syndrome,” “The Electric Horseman” with Robert Redford, and “9 to 5” with Lily Tomlin and Dolly Parton.

She stars in the Netflix television series “Grace & Frankie.”