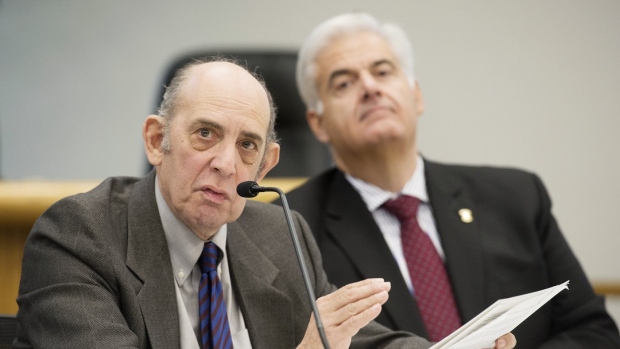 Montreal city councillor Marvin Rotrand, left, and Montreal West mayor Beny Masella attend a news conference in Montreal, Friday, April 5, 2019. A Jewish group is calling on a Montreal venue to cancel a performance by a French rapper whose music it describes as openly hateful and anti-semitic. THE CANADIAN PRESS/Graham Hughes

A Jewish group is calling on a Montreal venue to cancel a performance by a French rapper whose music it describes as "openly antisemitic and hateful."

B'nai Brith Canada sent a letter on Friday to the owners of L'Olympia theatre in Montreal, urging them to cancel a Dec. 4 show by musician Freeze Corleone.

"He has continued to exploit and abuse his platform to adopt a particularly virulent antisemitism."

In an interview on Sunday, Rotrand said Freeze Corleone has compared himself to Adolf Hitler and his lyrics include Holocaust denial and antisemitic tropes.

"His lyrics are clearly antisemitic, practically fomenting hate and violence towards Jews," he said.

"There's Holocaust denial and pleasure expressed that the Holocaust happened, and clear lyrics comparing himself to Hitler."

Rotrand says his group will be speaking to the Canada Border Services Agency and Quebec authorities in the hopes that the artist won't be allowed to perform.

The rapper's albums have drawn widespread criticism in France, including from the International League Against Racism and AntiSemitism.

In 2020, France's Minister of the Interior, Gérald Darmanin, tweeted that government was studying the possibility of prosecuting Freeze Corleone over words the politician described as "unspeakable" Nazi apologism and antisemitism.

But Rotrand said the artist doesn't appear to have been convicted of a hate-related crime.

The Olympia's management team did not immediately respond to a request for comment, but Rotrand said they appear to be citing freedom of expression as justification for allowing the show to take place.

"We don't think hate speech is free speech," Rotrand said, adding that he does not believe the venue would be so accepting of an artist who wrote racist lyrics targeting Black or Asian people.

The letter B'nai Brith sent to the venue noted the recent backlash against American artist Kanye West, who has been dropped by his talent agency and other partners after antisemitic comments.

Rotrand said the theatre's management has yet to directly respond to B'nai Brith's letter.

The Centre for Israel and Jewish Affairs also released a statement denouncing the upcoming show, which comes as reports of antisemitic incidents are rising around the world.

"We should not be blind to messages of Nazi ideology, Hitler, or Third Reich apologists, to conspiracy theories, or the trivialization of the Holocaust," said Eta Yudin, the organization's Quebec vice president.

"We know too well where they lead."

CIJA said that if the owners of the venue won't cancel, they should at least donate the proceeds to "causes that promote education, peace, and coexistence," such as the Montreal Holocaust Museum.

The Canadian Press could not reach Freeze Corleone's management for comment.