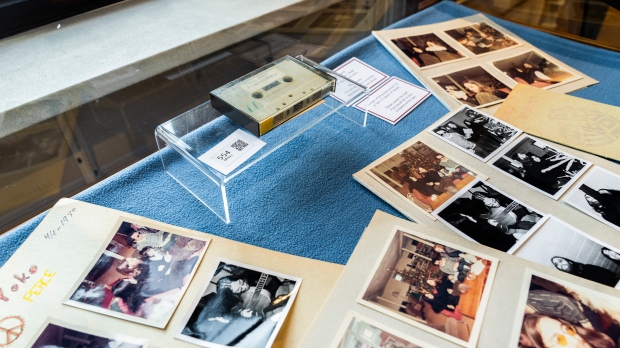 FILE - In this Friday, Sept. 24, 2021 file photo, aview of photos and a cassette with the recording of four Danish schoolboys' interviews with John Lennon and Yoko Ono during the famous couple's winter stay in Thy, in Jutland, Denmark, in 1970, on display at Bruun Rasmussen Auction House in Copenhagen. A cassette with a 33-minute audio recording of John Lennon, who was interviewed by four Danish teenagers for their school paper, and an apparently unpublished song by the late Beatle, has fetched 370,000 kroner ($58,240) at an auction Tuesday, Sept. 28, 2021. (Ida Marie Odgaard/Ritzau Scanpix via AP, File)

COPENHAGEN, Denmark (AP) - A cassette tape with a 33-minute audio recording of John Lennon being interviewed by four Danish teenagers 51 years ago as well as an apparently unpublished song by the late Beatle fetched 370,000 kroner ($58,240) at a Denmark auction Tuesday.

The tape, recorded on Jan. 5, 1970, chiefly consists of Lennon and his wife, Yoko Ono, speaking about being in Denmark and world peace. It also has the couple singing two songs: 1969's “Give Peace a Chance” and “Radio Peace,” which was made for a radio station in the Netherlands but never released.

The cassette was put up for sale by Bruun Rasmussen Auctioneer in Copenhagen together with 29 still photos and a copy of the school newspaper for which the teenagers had interviewed Lennon and Ono. The pre-sale estimate for the lot was 200,000 kroner to 300,000 kroner ($31,481 to $47,222).

The Danish teenagers did the interview in northern Denmark at the height of the Vietnam War and the Cold War because Lennon and Ono had “a message of peace, and that was what was important to us,” Karsten Hoejen, who made the recording on a tape recorder borrowed from the local hi-fi shop, told The Associated Press before the auction.

Lennon and Ono were in the northern Danish region of Thy because Ono's ex-husband had moved there and brought their 5-year-old daughter Kyoko with him.

Alternative living communities also mushroomed in Denmark from the late 1960s, attracting people from abroad, and music festivals were organized inspired by Woodstock and the ones on the Isle of Wight.

Tuesday's auction was devoted to 20 century artwork and featured 116 items for sale under the title “Paintings, sculptures and a recording with John Lennon.”