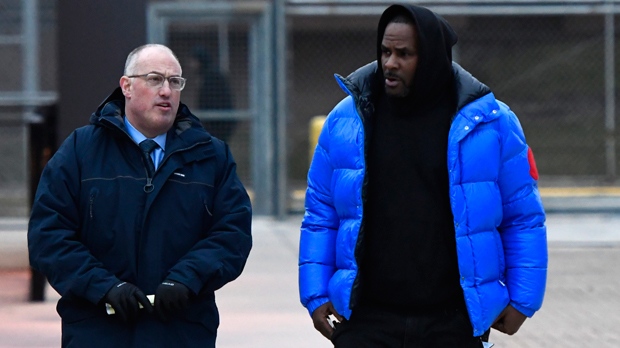 In this Monday, Feb. 25, 2019 file photo, R. Kelly, right, leaves Cook County Jail with his defense attorney, Steve Greenberg, in Chicago. Sex videos like those that have been integral to the criminal cases against R. Kelly have been circulating across the nation for years. Some of the tapes leaked out of the singer's collection in the 1990s. (AP Photo/Matt Marton, File)

CHICAGO -- Cameras will be allowed in the courtroom during the trial and pretrial hearings in R. Kelly's sexual abuse case, but the R&B singer's accusers can't be photographed or filmed without their consent, a judge ruled Friday.

The Grammy-winning singer didn't attend the brief hearing in Cook County Circuit Court, but his attorney took a similar position to the lawyer for "Empire" actor Jussie Smollett earlier this week and welcomed cameras in the courtroom.

"Mr. Kelly wants this to be an open and transparent process," said attorney Steve Greenberg. "So far there have been rumours, there have been allegations ... but with cameras in the courtroom, everyone will see what really happens."

The judge in Smollet's case, who also sits on the Cook County Circuit Court, hasn't decided yet whether to allow cameras during the actor's trial on charges accusing him of lying to the police about being the victim of a racist and homophobic attack. With neither side objecting to them , though, it's almost certain that the judge will allow them.

As for Kelly's case , Associate Judge Lawrence Flood said cameras will be allowed going forward, beginning with the next hearing on March 22. He also said two of Kelly's accusers have already indicated that they don't want to be photographed, filmed, or have their voices recorded in court.

Kelly, 52, has pleaded not guilty to 10 counts of aggravated sexual abuse pertaining to four women, including three who were minors at the time the abuse allegedly occurred. The abuse in question is alleged to have occurred over roughly a decade, starting in the late 1990s.

The Kelly and Smollett cases have helped turn the hulking courthouse on Chicago's South Side into something of a legal television studio in recent weeks.

While there have been several cases filmed in Cook County since cameras were first allowed in courtrooms in late 2014, it wasn't until last fall that they took centre stage in one of the most significant trials in recent Chicago history.

For months, the cameras captured the case of a white Chicago police officer charged with murder in the 2014 shooting death of a black teenager named Laquan McDonald. Viewers got to watch former Officer Jason Van Dyke explain what happened on the night he shot the teen 16 times. They also got to see the jury convict Van Dyke of second-degree murder and aggravated battery and the judge sentence him to six years and nine months in prison.

Although the Van Dyke was the first officer in decades to stand trial for an on-duty shooting and involved someone dying, the Kelly and Smollett cases are at least as sensational, given their celebrity status.

Smollett, who is black and gay and plays the gay character Jamal Lyon on the Fox TV show, told police he was attacked by two masked men in downtown Chicago early on the morning of Jan. 29. He said the men -- one of whom he said was white -- hurled racist and homophobic slurs as they beat him and looped a noose around his neck before fleeing.

Prosecutors allege the Smollett hired two friends to help him stage the attack because he was unhappy with his salary and wanted to drum up publicity to further his career. Smollett has denied wrongdoing and pleaded not guilty to the 16 counts of disorderly conduct that he faces.

Kelly, meanwhile, has been trailed for decades by allegations that he victimized women and girls, though he was acquitted of child pornography charges in 2008 related to a tape that prosecutors said showed him having sex with a girl as young as 13. The singer maintains that he is innocent and has said he has never had sex with a minor.

Although Smollett's and Kelly's say their clients welcome the cameras, some caution that it may not a good idea.

Prominent New York defence attorney Joe Tacopina said he'd be worried that the cameras might affect how the trial proceeds, particularly when it comes to the judge.

"A judge who knows his every ruling is going to be watched on television is not going to want to look like he's soft on crime," he said. "That could work against the defence."

Chicago lawyer Joe Lopez said that in Kelly's case, allowing the trial to play out on television could affect the singer's ability to earn a living no matter what the outcome if what unfolds turns off fans.

"The allegations are going to come out in the newspaper, true, but a lot of his audience are young kids and they watch TV and don't read the newspaper," he said.

Phil Turner, a Chicago defence attorney and former federal prosecutor, said the risks that the public might turn against Smollett are just as great.

He said that if the two brothers who have admitted that Smollett hired them to carry out the attack testify and come off as believable and sincere, it could make it easier for the public to dismiss what Smollett says if he takes the stand.

"Everybody knows this guy is an actor, he's good at acting. But the two guys, by admitting they did it, it makes them completely credible."