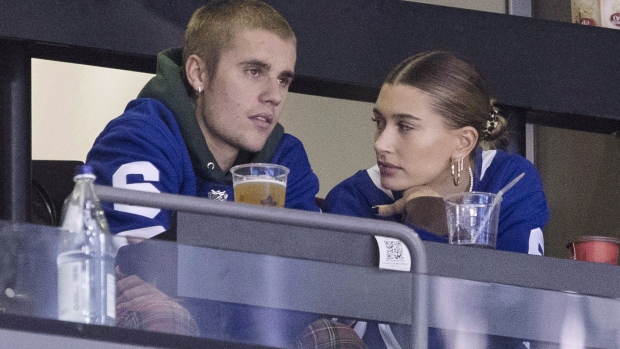 Justin Bieber watches alongside his wife Hailey Baldwin, right, during NHL hockey action between the Philadelphia Flyers and the Toronto Maple Leafs, in Toronto on Saturday, Nov. 24, 2018. THE CANADIAN PRESS/Chris Young

TORONTO - If Tim Hortons hopes to win over coffee drinkers with its revamped cup lid, it should count pop superstar Justin Bieber out.

The Canadian singer waded into the heated debate over the coffee chain's recent lid redesign by launching a poll on his Instagram account.

“Who's Canadian and misses these lids at Tim Hortons like I do,” Bieber asked his social media followers alongside an image of the old Tim Hortons lid.

We're making a a change one lid at a time. Thanks @timhortons

Roughly 64 per cent of respondents said they missed the old lid as of Friday evening.

Earlier this year, Tim Hortons relaunched its coffee cups with a more environmentally-friendly lid emblazoned with a maple leaf, a move that divided its customers into a camp that either supported or rejected the change.

The company said the lid was tested in two years of development where thousands of people climbed hundreds of stairs and others sipped on their coffees while driving to design a cap that will cut down on the leaking.

“The only people who are going to be pissed off are dry cleaners and car-washing companies. They will wash fewer shirts and fewer cars,” said Tim Hortons president Alex Macedo in a 2018 interview with The Canadian Press.

However, Bieber doubled down on his sentiment with a longer post on his main Instagram account where he explained precisely why he wasn't happy with the changes, and reposted user comments supporting his opinion.

“These new lids are uncomfortable on the mouth, and you get very little liquid each drink,” the Stratford, Ont.-raised performer wrote.

“It's a damn outrage and needs to be changed back.”

Bieber has long supported the Hamilton-founded coffee brand, and his wife Hailey more recently hopped on the bandwagon. She's posted photos in Los Angeles with a box of Timbits and frequently posed with local Tim Hortons staff for photographs.

@timhortons I know they could leak but it was easier to drink out of.. the coffe would come out better.. these new lids are uncomfortable on the mouth, and you get very little liquid each drink it's a damn outrage and needs to be changed back. Tbh it shouldn't be plastic find a way to be recyclable let's change the world 1 lid at a time

This report by The Canadian Press was first published Dec. 27, 2019.