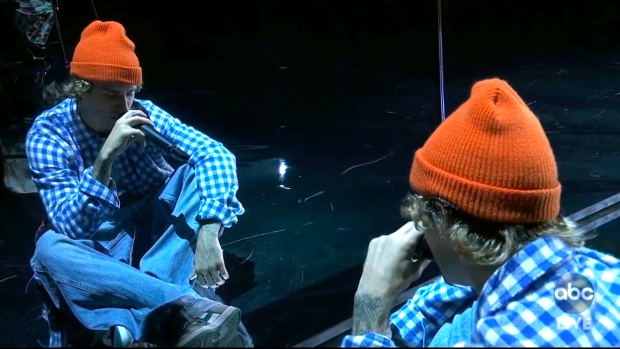 In this screen shot provided by ABC on Sunday, Nov. 22, 2020, Justin Bieber performs at the American Music Awards at the Microsoft Theater in Los Angeles. (ABC via AP)

The singers released the track Friday and the AMAs, airing Sunday on ABC, marked the the first time they performed it together. The performance began with a stripped-down Bieber singing his recent hit “Lonely,” with songwriter-producer Benny Blanco on piano, and “Holy,” where background dancers wearing masks joined him.

Mendes, strumming his guitar, then appeared for “Monster,” which featured the twentysomethings singing lyrics about about fame and growing up as celebrities who attracted massive public attention.

The performance, like a good number of them at the AMAs, was recently pre-taped because of the coronavirus pandemic. But host Taraji P. Henson, who excitedly danced to a medley of songs, appeared live from the Microsoft Theater in Los Angeles. She joked that A-list celebrities were in the audience, including Beyoncé (a cardboard cut-out of the singer appeared in a seat).

And another Canadian — the Weeknd — is poised to have an all-star night: He’s nominated for eight prizes and won the first televised award — favorite soul/R&B album for “After Hours.”

“The last time I received this award it was given to me by the late, great Prince. And, you know, he’s the reason I get to constantly challenge the genre of R&B and yeah, I’d like to dedicate this to him,” he said.

Later in the show, the Weeknd and Kenny G will join forces for a rendition of the pop star’s hit “In Your Eyes.” The Weeknd will also perform “Save Your Tears.”

The Weeknd and Roddy Ricch — also nominated for eight awards — will compete for the show’s top honor, artist of the year. Other nominees include Bieber, Taylor Swift and Post Malone.

Nominees are based on streaming, album and digital sales, radio airplay and social activity, and reflect the time period of Sept. 27, 2019, through Sept. 24, 2020.