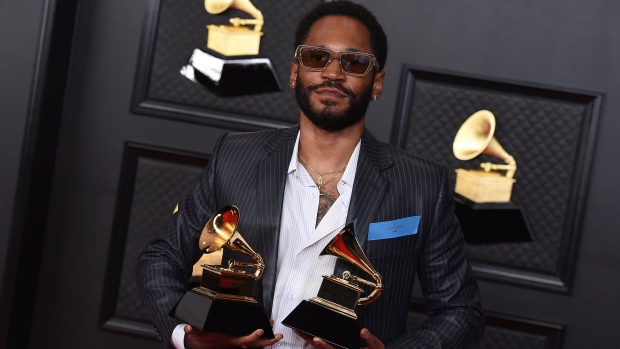 Kaytranada poses in the press room with the award for best dance recording and dance electronic album, for Bubba, at the 63rd annual Grammy Awards at the Los Angeles Convention Center on Sunday, March 14, 2021. (Photo by Jordan Strauss/Invision/AP)

TORONTO - Kaytranada lived up to his reputation as one of Canada's respected, but stealth, music producers as he swept through the Grammy Awards on Sunday with a double win that needed little fanfare.

The Montreal-raised DJ picked up best dance recording for his song “10%,” featuring Kali Uchis, and best dance or electronic album for “Bubba” in a matter of minutes.

And it all happened at the outset of a streaming ceremony, before the television broadcast, where most of the awards were handed out.

“This is crazy. This is insane,” Kaytranada, born Louis Celestin, said in a remote video feed as he accepted the second of his two awards.

“I'm taking this one back to Montreal.”

His blink-and-you'll-miss-him appearance helped set the tone for a night of speedy celebrations that culminated with the physically distanced broadcast show from downtown Los Angeles, where a select group of nominees attended in person.

Celestin lost the third of his nominations to Megan Thee Stallion for best new artist.

Justin Bieber became the owner of a country Grammy, the latest twist in his pursuit of being considered an R&B singer, rather than a pop star.

Bieber had expressed displeasure ahead of the Grammys over seeing music from his recent “Changes” album nominated in pop categories when he felt it was in the R&B spirit.

He didn't show up at the ceremony, posting on Instagram at the start of the Grammys broadcast that he was staying in to watch a movie.

Other Canadian winners included Shawn Everett, who now has six Grammys to his name.

The music engineer, raised in Bragg Creek, Alta., won for Beck's “Hyperspace,” in the best engineered album, non-classical category. He shares the award with a team of fellow engineers who worked on the album, but it was Beck who accepted the award on their behalf.

Everett said in a year when so many have faced hardship because of COVID-19, lamenting the loss of a traditional Grammy gathering seems like a low priority. But he felt the absence of his parents on awards night as his nominations often served as a reason for the family to visit.

“For me, it's a celebration of my parents and how much I've loved them and they've helped me,” he said.

“I wasn't able to be there with them, that's the biggest bummer.”

Jim (Kimo) West, who ran into a familiar pandemic technical glitch when his name was called for best new age album Grammy but his microphone was muted at home.

Viewers couldn't hear his acceptance speech, so producers quickly shuffled on to the next category leaving West without a chance to thank the fellow artists who collaborated on his Hawaiian slack-key guitar album, “More Guitar Stories.”

The Los Angeles-based musician maintained his sense of humour about the gaffe.

“(Usually) after the main show you go to some nice parties, and now I'm just going to order some takeout, hang out and watch TV,” said the Toronto-born guitarist for “Weird Al” Yankovic.

“I really want to win another one so that I can have the real experience.”

This report by The Canadian Press was first published March 14, 2021.