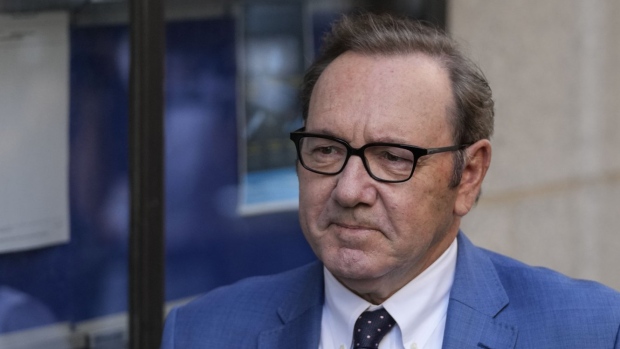 FILE - Actor Kevin Spacey arrives at the Old Bailey in London on July 14, 2022. Spacey heads to court Thursday, Oct. 6, to defend himself in a lawsuit filed by Anthony Rapp, the actor who in 2017 made the first in a string of sexual misconduct allegations that left the “House of Cards” star's theater and filmmaking career in tatters. (AP Photo/Frank Augstein, File)

NEW YORK (AP) - Kevin Spacey looked toward jurors Thursday as a lawyer told them that Spacey was trying to satisfy sexual urges when he jumped on top of a then-14-year-old actor on a bed at a party in 1986, but a lawyer for the “House of Cards” star said it never happened.

The opening statements in a trial expected to last less than two weeks came in a lawsuit brought by Anthony Rapp, the actor who in 2017 made the first in a string of sexual misconduct allegations that left Spacey's theater and filmmaking career in tatters.

The lawsuit stems from an alleged encounter between the two men in 1986, when Rapp was a child actor performing in a Broadway play and Spacey, then 26, was having a breakout moment on Broadway.

Rapp said the older actor invited him to a party at his Manhattan apartment, then tried to seduce him in a bedroom after the other guests had left.

Rapp's lawyer, Peter Saghir, said a drunk, swaying Spacey swept him up in his arms, like a groom carrying “a bride over a threshold,” then laid him on a bed and climbed on top of him. Saghir said Rapp will testify he quickly wriggled away and fled to a bathroom, before encountering Spacey again near the door as he tried to leave.

“Are you sure you want to go?” the lawyer said Spacey asked him.

Saghir said Spacey was trying to get Rapp to stay “to gratify his sexual desire” after pressing his pelvis into Rapp's hips when they were on the bed.

“This was a deliberate act,” the lawyer said. “This is not horseplay.”

When Rapp told his story to Buzzfeed in 2017 as the #MeToo movement began to grip Hollywood, Spacey said he had no recollection of the incident, “but if I did behave then as he describes, I owe him the sincerest apology for what would have been deeply inappropriate drunken behavior.”

Since then, though, Spacey's legal team has said the accusation is false. Rapp never attended the party, they said. And even if it had happened as Rapp described, they have argued, it wouldn't constitute a sexual advance.

Attorney Jennifer Keller, representing Spacey, said the actor has avoided discussing the case in the media and social media but was looking forward to testifying at trial.

“He wants justice,” she said. “Once you've heard both sides, you'll be convinced this alleged assault never happened at all.”

Keller said Rapp sued Spacey and spoke out “for attention, for sympathy and to raise his own profile” as Spacey's career made him a household name while Rapp's career never blossomed in the same way.

The trial comes at a fraught time for Spacey, now 63.

Three months ago he pleaded not guilty in London to charges that he sexually assaulted three men between 2004 and 2015 when he was the artistic director at the Old Vic theater.

A judge in Los Angeles this summer approved an arbitrator's decision to order Spacey to pay $30.9 million to the makers of the Netflix show “House of Cards” for violating his contract by sexually harassing crew members.

Those setbacks followed some victories for Spacey, who has recently been acting in films again.

In 2019, prosecutors in Massachusetts dropped indecent assault and battery charges filed after a man said Spacey groped him at a Nantucket bar. Spacey said he was innocent. His accuser also dropped a civil lawsuit.

Spacey won an Academy Award for Best Actor for his role in “American Beauty,” a 1999 film in which he played a frustrated suburban father who lusts after his teenage daughter's best friend.

Rapp, who as a teenager acted in films including “Adventures in Babysitting,” was part of the original Broadway cast of “Rent,” and is now a regular on “Star Trek: Discovery” on television.

Both Rapp and Spacey are expected to testify at the trial.

Other witnesses will include a psychologist who believes Rapp experiences post-traumatic stress disorder as a result of the encounter with Spacey.