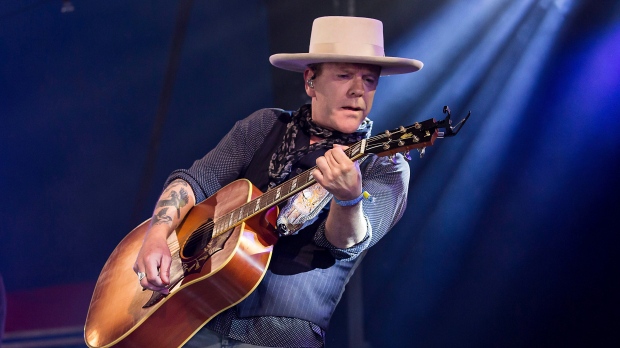 Kiefer Sutherland is promising fans he'll make up some of his tour dates he had to cancel in Denmark and Gothenburg, Sweden due to injury after he slipped on the steps of his tour bus and injured his ribs. (FILE PHOTO/THE CANADIAN PRESS/Grant Pollard/Invision/AP)

TORONTO - Kiefer Sutherland is promising fans he'll make up some of the tour dates he had to cancel in Denmark and Gothenburg, Sweden due to injury.

The Toronto-raised actor-singer recently posted on his Instagram account that he slipped on the steps of his tour bus while travelling to Denmark and seriously injured a rib.

He said the injury made “it difficult to breathe and impossible to sing,” forcing him to cancel the last three shows of the tour.

Sutherland added he has “every intention of making up these shows ... in September/October” and apologized for any inconvenience he may have caused to fans who had bought tickets.

The “24” and “Designated Survivor” star was touring for his country-rock sophomore album, “Reckless & Me.”

The 52-year-old Golden Globe winner recently toured Canada and the U.S. for the album, which includes some personal songs about his life.

“Thank you all for your incredible kindness and support,” Sutherland posted on his Instagram account Sunday, along with a GIF of a cat falling down the stairs.

“We'll be back on the road before you know it... and I promise to be more careful walking downstairs on a moving bus!”