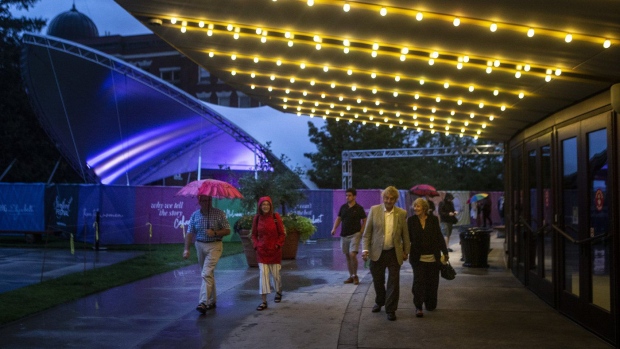 Audience members make their way home after the Stratford Festival's opening night of their theatre season in Stratford, Ont., Tuesday, July 13, 2021. The Stratford Festival is bridging the old and the new with a 2023 slate featuring Shakespeare classics, beloved musicals and fresh takes on familiar stories. THE CANADIAN PRESS/Chris Young

TORONTO - The Stratford Festival is bridging the old and the new with a 2023 slate featuring Shakespeare classics, beloved musicals and fresh takes on familiar stories.

The renowned theatre company in southwestern Ontario has announced 13 plays to be staged the between mid-April and October under the season's theme of “Duty vs. Desire.”

Stratford will hearken back to its Shakespearean traditions starting with season opener “King Lear,” which will be followed by productions of “Much Ado About Nothing,” “Richard II” and “Love's Labour's Lost.”

The festival will turn up the volume with a pair of musicals, the rock opera “Rent” and the Arthurian comedy “Monty Python's Spamalot.”

The lineup also features a movement-based reimagining of Mary Shelley's monstrous tale “Frankenstein Revived,” and a new adaptation of the children's fantasy “A Wrinkle In Time.”

Canadian stories set to hit the stage include the historical satire “Women of the Fur Trade,” the seminal Quebecois play “Les Belles-Soeurs” and the Stratford-commissioned “Casey and Diana” about a Toronto AIDS hospice preparing for a visit by the Princess of Wales in 1991.