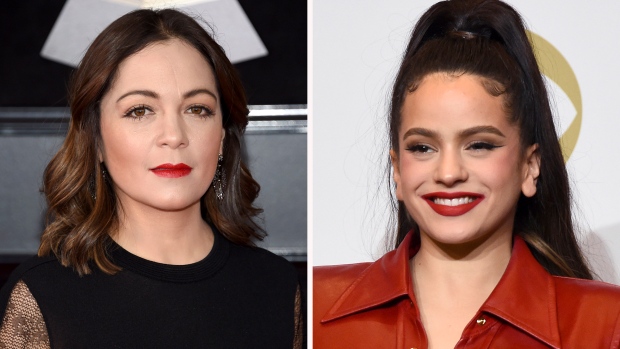 This combination photo shows Natalia Lafourcade, left, and Rosalia. A year after Rosalia made history by becoming the first solo female performer in 13 years to win the top prize at the Latin Grammys, Natalia Lafourcade followed in her footsteps with a big win at the 2020 show, taking home the album of the year honor on Nov. 19, 2020, for "Un Canto Por México, Vol. 1." (AP Photo)

NEW YORK - A year after Rosalia made history by becoming the first solo female performer in 13 years to win the top prize at the Latin Grammys, Natalia Lafourcade followed in her footsteps with a big win at the 2020 show.

The Mexican singer won album of the year - a category dominated by male acts - on Thursday night with “Un Canto Por Mexico, Vol. 1.” Lafourcade won three awards at the show, tying Rosalia and Carlos Vives for most wins.

Lafourcade didn't attend the Latin Grammys, which aired live on Univision and featured a number of performances, most of them pre-taped due to the coronavirus pandemic. The show did not have a live audience or a red carpet, and some of the performances featured band members and dancers sporting masks as they entertained onstage.

Before Rosalia's win for album of the year, Shakira was the last solo female to win the prize in 2006 with “Fijacion Oral Vol. 1.”

Residente - the most decorated act in the history of the Latin Grammys - continued his winning streak by taking home song of the year for “Rene” and best rap/hip-hop song for “Antes Que El Mundo Se Acabe.” Fito Paez was also a double winner Thursday.

But the acts poised to make history after receiving 13 and nine nominations each - J Balvin and Bad Bunny - both walked away with just one win. Bad Bunny won best reggaeton performance for “Yo Perreo Sola” and Balvin picked up best urban music album for “Colores.”

Despite his 13 nominations, Balvin only had a chance of winning eight honours since he competed against himself in multiple categories. Bad Bunny had a similar issue at the show.

Balvin was a winner onstage, though.

Before his performance, footage of current events such as the Black Lives Matter protests - including an image of George Floyd - and more appeared onscreen. Balvin began performing his song “Rojo” (“Red”) under two large praying hands in a white suit, ending the song with fake blood running down his hands and clothes.

Pitbull also moved the needle with his performance, where he was joined by frontline workers onstage - some playing guitar, some singing background, one on drums. Together, they performed “I Believe That We Will Win” (World Anthem),” an upbeat song Pitbull released earlier this year during the pandemic to inspire others.

“They dreamed of being rock stars playing full stadiums, they represent a large group of individuals all around the world who day after day sacrifice their lives for a safer world,” Pitbull said. “We gonna live it tonight.”

“WE WILL WIN” appeared onscreen behind the performers at the end of the song as Pitbull saluted the musicians.

Karol G - who was nominated for four awards but walked away empty handed - performed alongside classical musicians to give a new edge to her global hit “Tusa,” which features Nicki Minaj rapping in Spanish and English. Karol G shout-outed the rapper during the performance.

Grammy, Emmy and Tony winner Lin-Manuel Miranda kicked off the Latin Grammys with a strong message about Latin music. Speaking in Spanish and English, he said Latin music “unites all of us and makes us human.”

“This is our night,” he added.

Other winners Thursday included Alejandro Sanz, who won record of the year for a second consecutive time thanks to “Contigo,” his tribute song to Joaquin Sabina; Ricky Martin won best pop vocal album for “Pausa”; and Chiquis - the daughter of late singer Jenni Rivera - won best banda album with “Playlist.”

The Latin Grammys was hosted by Oscar-nominated actor Yalitza Aparicio, actor-singer Ana Brenda Contreras and salsa singer Victor Manuelle, who replaced singer Carlos Rivera after he said he was exposed to the coronavirus.