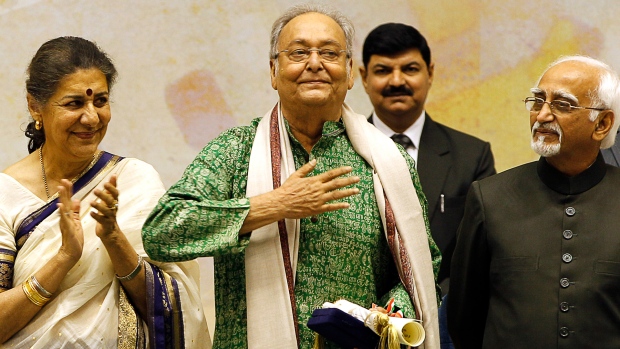 In this May 3, 2012 file photo, Bengali language film actor Soumitra Chatterjee, center, gestures after receiving the Dadasahab Phalke Award for the year 2011, as Indian Vice President Hamid Ansari, right, and Indian Minister for Information and Broadcasting Ambika Soni look on, during the 59th National Film Awards in New Delhi, India. Chatterjee, the legendary Indian actor with more than 200 movies to his name and famed for his work with Oscar-winning director Satyajit Ray, has died. He was 85. (AP Photo/ Manish Swarup, File)

NEW DELHI -- Soumitra Chatterjee, the legendary Indian actor with more than 200 movies to his name and famed for his work with Oscar-winning director Satyajit Ray, died Sunday of complications from the coronavirus. He was 85.

Chatterjee's daughter, Poulami Bose, said her father died at a hospital in the city of Kolkata in West Bengal state where he had been staying since testing positive for the virus in early October. He is also survived by his wife and a son.

Chatterjee had a career in Bengali-language films that spanned six decades and was best known for his work with Ray, one of the world's most influential Indian directors, whose films garnered critical acclaim and won multiple awards worldwide, putting India on the global cinema map.

Chatterjee's films with Ray that won global recognition include “Apur Sansar” (“The World of Apu”), the third in the director's internationally recognized Apu Trilogy, “Charulata” (“The Lonely Wife”), “Aranyer Din Ratri” (“Days and Nights in the Forest”), “Ghare Baire” (“The Home and the World”) and “Ganashatru” (“Enemy of the People”).

Telegraph India, an English-language newspaper published in Kolkata, wrote in its obituary for Chatterjee that he had a 14-title body of work with director Ray “that would have ensured him immortality even if he hadn't done anything else in life.”

Despite his immense popularity in Bengali-language cinema, Chatterjee stayed away from Bollywood. But for 90 million Bengalis, he was a cultural icon and an unforgettable star.

“International, Indian and Bengali cinema has lost a giant,” tweeted Mamata Banerjee, West Bengal's chief minister. “We will miss him dearly. The film world in Bengal has been orphaned.”

Before embarking on his film career in 1959, Chatterjee worked as an announcer at All India Radio in Kolkata. He was also an accomplished playwright and a poet.

In a 2016 interview, Chatterjee displayed his indomitable spirit to act even at an old age.