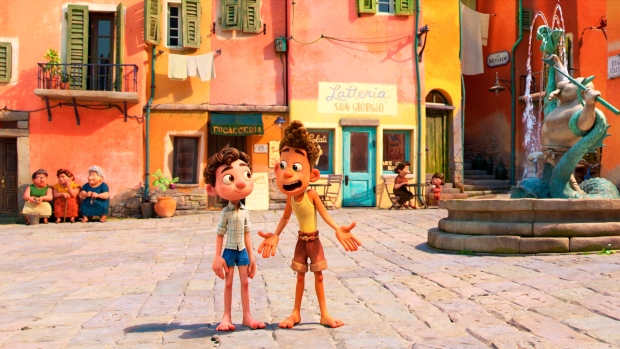 This image released by Disney shows characters Alberto, voiced by Jack Dylan Grazer, right, and Luca, voiced by Jacob Tremblay in a scene from the animated film "Luca." (Disney via AP)

TORONTO - Like his adorable sea-monster character in Disney and Pixar's new animated film “Luca,” actor Jacob Tremblay is set for some summertime fun.

And the Vancouver-raised star says he hopes for more adventures on the horizon, now that he's had his first dose of a COVID-19 vaccine.

The 14-year-old posted a video of himself getting the jab on Twitter on May 30 and says it provided a sense of “relief” as he heads into the warmer months, with planned family outings including a visit to Osoyoos Lake in British Columbia's south Okanagan region.

“Obviously you always get nervous to have needles, especially such an important needle, too. But after you do it, the relief of like, 'It's all coming to an end now and we'll be able to see people again' - it's just really special,” Tremblay said in an interview.

“So I hope that people will feel encouraged to go out and get a vaccine, because it's very, very important in getting it back to normal.”

Set in a seaside town on the Italian Riviera, “Luca” stars Tremblay as the eponymous 13-year-old who looks and lives like a fish with his family in the water but morphs into human shape on land.

Despite his family's warnings that the human world is dangerous, Luca sets out with fellow sea-monster friend Alberto, voiced by Jack Dylan Grazer, one summer to explore life above the water's surface.

Enrico Casarosa directed and Jesse Andrews and Mike Jones wrote the story, which premieres Friday on the Disney Plus streaming service.

Other cast members include Emma Berman as the boys' friend, Saverio Raimondo as the town bully, Maya Rudolph as Luca's mom and Jim Gaffigan as his dad.

Tremblay had to pronounce certain words with an Italian accent in the film, which he said he had a natural flair for.

“I already knew how to roll my Rs prior to this, I guess maybe because I come from a Hispanic family,” he said, noting his grandfather on his mother's side is from Chile.

Tremblay said he recorded some of the film at Pixar Animation Studios in Emeryville, Calif., right before the pandemic hit, and saw some of the “Luca” concept art. The film team captured Tremblay's face on camera and incorporated features into the look of Luca, he said.

Tremblay voiced the rest of his parts during the pandemic in a studio in downtown Vancouver.

He said Casarosa, whose upbringing on the Italian Riviera inspired the character of Alberto, directed scenes remotely by meeting Tremblay on a video conferencing app and playing clips of the film.

“Luca” is a coming-of-age story about taking risks and pushing oneself, which Tremblay said he's done throughout his acting career, starting with his acclaimed role as a young boy held captive with his mother in the harrowing 2015 drama “Room.” His other roles include that of a child with Treacher Collins syndrome in the 2017 drama “Wonder,” and a potty mouthed sixth-grader in the 2019 comedy “Good Boys.”

“You have to really go 100 per cent and sometimes you have to go out of your comfort zone to do a role,” he said.

Tremblay said that's certainly the case when he hits the slopes in winter to ski, when he's sometimes dogged by self-doubts just like Luca, whose internal critic is dubbed “Bruno.”

“Sometimes I have to silence Bruno, I guess, when I'm trying to adventure off and get better,” he said.

“If there's a certain jump that looks really scary but I kind of want to do it, sometimes you'll have to silence Bruno. And maybe I'll get really hurt and just fall down or maybe I'll land it.”

Tremblay said he's focused on playing characters “who are relatable” and “like real people.”

And he'd like to explore other parts of the screen industry.

“I do write for fun now. It's really difficult to play around in a script format. So I'll kind of just plot things down, if I have story ideas. So I'm hoping when I'm older, I'll be able to make certain stories that people can connect with and people will enjoy. And I'll make ones too that people will want to watch.”