Lucky No.7: Taylor Swift nabs 7th No.1 album with 'folklore' 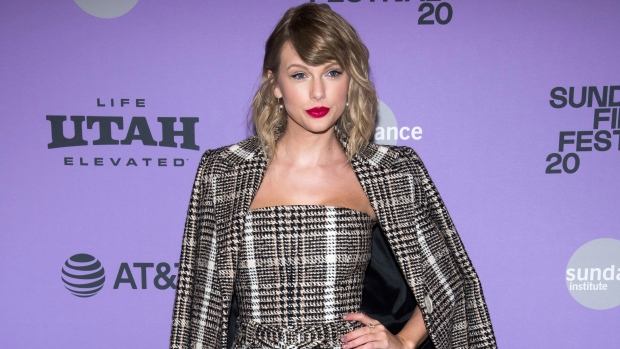 FILE - This Jan. 23, 2020 file photo shows Taylor Swift at the premiere of "Taylor Swift: Miss Americana" in Park City, Utah. Swift's eighth album "Folklore" debuted at No. 1 on Billboard's 200 albums chart this week, marking the best first-week sales of the year and giving the pop star her seventh No. 1 title on the chart. (Photo by Charles Sykes/Invision/AP, File)

Swift's eighth album debuted at No. 1 on Billboard's 200 albums chart this week, marking the best first-week sales of the year and giving the pop star her seventh No. 1 title on the chart. According to Nielsen Music/MRC Data, the album sold 846,000 equivalent albums in the U.S. based on a combination of sales and streams.

The success makes Swift, 30, the first artist to have seven different albums sell at least 500,000 albums in a single week. Swift dropped “folklore” in a surprise form, announcing the album's release a day before it came out on July 24. It features production and songwriting work from The National's Aaron Dessner and frequent collaborator Jack Antonoff.

With 289.85 million on-demand streams of its songs, “folklore” also marks the largest streaming week for an album by a female act this year. Swift is third overall, behind the powerful streaming efforts of Juice WRLD's “Legends Never Die” and Lil Uzi Vert's “Eternal Atake.”

“Folklore” was only released digitally, but will be available as a CD on Aug. 7. The album was sold with a number of merchandise bundles, packaged with cardigans, hoodies, T-shirts, cellphone cases and more. A digital version of “folklore” came with a purchase of one of the merchandise items, counting as an album sale for Swift.

This cover image released by Republic Records shows “Folklore," the eighth record by Taylor Swift. Swift says the standard edition, available Friday, will include 16 tracks and the album will feature Bon Iver, Aaron Dessner of The National and frequent collaborator Jack Antonoff. (Republic Records via AP)