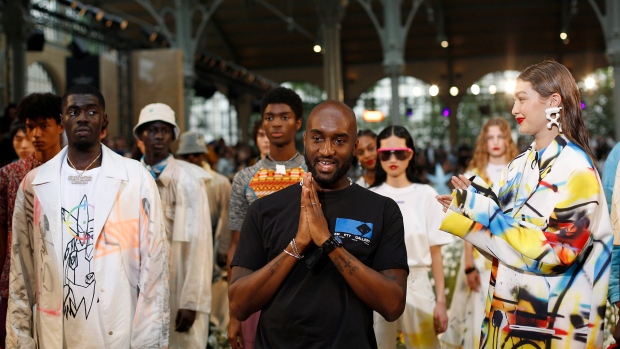 Designer Virgil Abloh, centre, accepts applause as he poses with other models including Gigi Hadid, right, at the conclusion of the Off White mens Spring-Summer 2020 fashion collection presented in Paris, Wednesday, June 19. (AP Photo/Thibault Camus)

(CNN) -- Virgil Abloh, the acclaimed menswear designer for Louis Vuitton and founder and CEO of Off-White, died Sunday of cancer, according to a post from his verified Instagram account. He was 41.

"We are devastated to announce the passing of our beloved Virgil Abloh, a fiercely devoted father, husband, son, brother, and friend. He is survived by his loving wife Shannon Abloh, his children Lowe Abloh and Grey Abloh, his sister Edwina Abloh, his parents Nee and Eunice Abloh, and numerous dear friends and colleagues," the post read.

"For over two years, Virgil valiantly battled a rare, aggressive form of cancer, cardiac angiosarcoma. He chose to endure his battle privately since his diagnosis in 2019, undergoing numerous challenging treatments, all while helming several significant institutions that span fashion, art, and culture.

"Through it all, his work ethic, infinite curiosity, and optimism never wavered. Virgil was driven by his dedication to his craft and to his mission to open doors for others and create pathways for greater equality in art and design. He often said, 'Everything I do is for the 17-year-old version of myself,' believing deeply in the power of art to inspire future generations.

"We thank you all for your love and support, and we ask for privacy as we grieve and celebrate Virgil's life," the post stated.

The luxury group LVMH, which owns Louis Vuitton, tweeted about his death and, in a statement, quoted LVMH chairman Bernard Arnault: "We are all shocked after this terrible news. Virgil was not only a genius designer, a visionary, he was also a man with a beautiful soul and great wisdom."

Born in 1980 in Rockford, Illinois, Abloh earned a degree in civil engineering from the University of Wisconsin Madison and completed a master´s degree in architecture at the Illinois Institute of Technology, according to his online bio.

He was a longtime collaborator with Kanye West, helping to hone the eccentric's artist's image and DONDA line. In 2012, Abloh founded the haute streetwear label Off-White, and in 2018 he made history as Louis Vuitton's first Black artistic director. With these groundbreaking positions, he became one of the most powerful Black men in the fashion industry. LVMH had accquired a majority stake in Off-White this July in an agreement that all sides hoped would begin a new chapter.

"I'm also honored to use this partnership to deepen my longstanding commitment to expand opportunities for diverse individuals and foster greater equity and inclusion in the industries we serve," Abloh said at the time. "This is an incredible new platform to take the disruption we've achieved together to a whole new level."

Primarily known for his work on menswear, Abloh's influence often stretched into other fields. He debuted his take on furniture design in 2017 and on vehicle design last year with Mercedes-Benz. In May, he was the designer for the poet Amanda Gorman's appearance on the cover of Vogue.

Abloh was named among Time Magazine's 100 Most Influential People in 2018, and the Museum of Contemporary Art Chicago presented an exhibition of the work of "genre-bending artist and designer" in 2019.