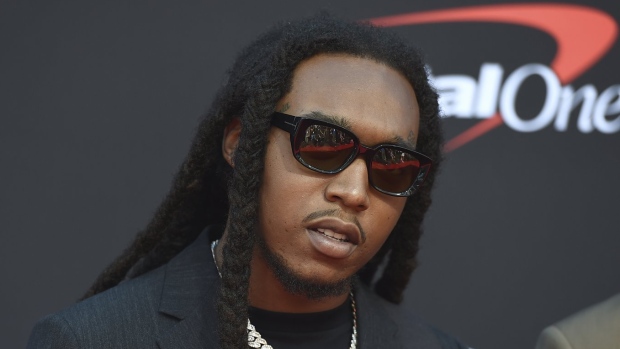 FILE - Takeoff, of Migos, arrives at the ESPY Awards in Los Angeles on July 10, 2019. A representative confirms that rapper Takeoff is dead after a shooting outside of a Houston bowling alley early Tuesday, Nov. 1, 2022. Takeoff, whose real name was Kirsnick Khari Ball, was part of Migos along with Quavo and Offset. He was 28. (Photo by Jordan Strauss/Invision/AP, File)

HOUSTON (AP) - The man accused of killing Takeoff of Migos last month had a brief court appearance in Houston Monday during which his lawyers proclaimed his innocence.

Attorneys for Patrick Xavier Clark deny court reports that he was about to flee to Mexico when he was arrested last week, saying he was planning a vacation.

Clark is jailed on a two-million dollar bond.

He will be back in court on Dec. 14 for a hearing on whether to reduce the bond.

Clark's defence team will not say whether Clark and Takeoff knew each other.

Takeoff was shot in the head and back as a party at a Houston bowling alley was ending on November 1st. Police say the gunfire erupted after a game of dice, but they believe Takeoff was an innocent bystander.