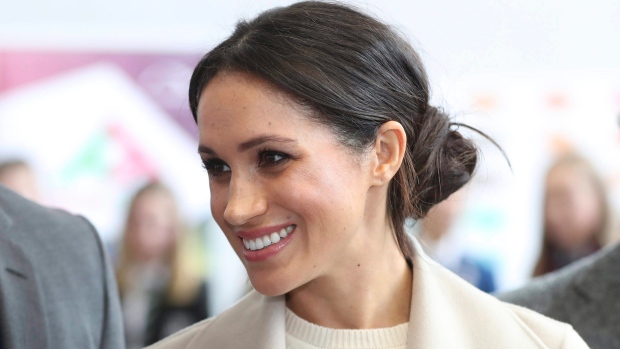 In this file photo, Meghan Markle speaks with school children during a visit with Prince Harry to the Eikon Exhibition Centre in Lisburn, Northern Ireland on March 23, 2018. (Niall Carson/Pool via AP)

LONDON - Meghan, the Duchess of Sussex, has won her remaining copyright claim against a British tabloid publisher over the publication of a personal letter she wrote to her estranged father.

The 39-year-old Meghan had already won most of her claim for misuse of private information and copyright infringement against Associated Newspapers Limited, the publisher of the Mail on Sunday and the MailOnline website.

The American former actress sued over five 2019 articles that published large portions of a letter she wrote to her father after her 2018 wedding to Prince Harry.

In February, a High Court judge ruled in her favour, saying the publishing of large parts of the handwritten letter was “manifestly excessive” and unlawful.

The judge granted the duchess's request for a summary judgment to settle the case, meaning she won that part of the case without having to go to trial.

But the court still had to decide whether Meghan was the “sole author” and copyright holder of the letter.

Today, the judge sided with Meghan's lawyers regarding the remaining parts of their copyright claim, after lawyers representing Queen Elizabeth II refuted the defence's claims that the letter's copyright belonged to the Crown.

Associated Newspapers Ltd. previously said it believed that Jason Knauf, the former communications secretary to Prince Harry and Meghan, was a co-author of the letter, and argued that this meant the letter belonged to the Crown.

Meghan's lawyer Ian Mill told the court that Knauf's lawyers confirmed he did not write the letter, and said that the defence's case on the ownership of copyright in the letter “has been shown to be completely baseless.”

In his ruling in February, judge Mark Warby said the public disclosure of Meghan's “personal and private letter” to her father Thomas Markle was unlawful.

Meghan and Harry officially stepped down from royal duties in March 2020 and moved to California with their young son Archie.

The couple has said that relentless scrutiny from the British media was one of the reasons they decided to leave the U-K.