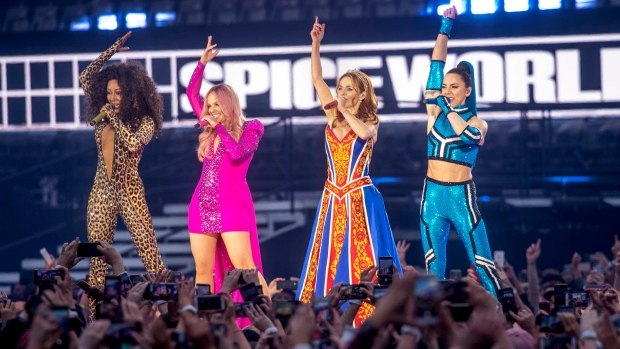 In 2019, the Spice Girls reunited for a 13-date tour of the United Kingdom and Ireland, which saw them perform in a host of cities including Dublin, Cardiff, and Manchester. (Dave J Hogan/Getty Images via CNN)

Two years after the Spice Girls performed their sellout reunion tour, Melanie Chisholm -- better known as Mel C or 'Sporty Spice' -- has hinted that the 90s girl group will returning to the stage.

Appearing on ITV's "Good Morning Britain" on Friday, the 47-year-old singer said the band would be "absolute fools" to not want to head back out on the road.

"Well you know, that's the dream," she said when host Kate Garraway asked whether fans will ever get to see the Spice Girls perform together again.

The Spice Girls, which formed in 1994, was made up of Chisholm, Emma Bunton, Geri Halliwell, Melanie Brown -- known as Mel B -- and Victoria Beckham. They also went by the respective nicknames of Sporty Spice, Baby Spice, Ginger Spice, Scary Spice and Posh Spice.

In 2019, the Spice Girls reunited for a 13-date tour of the United Kingdom and Ireland, which saw them perform in a host of cities including Dublin, Cardiff, and Manchester. They did so without Beckham, who declined to take part.

The last time Beckham shared a stage with the group was in 2012, when she hopped on the roof of a studded black cab to perform at the Olympics Closing Ceremony in London.

Reflecting on the success of their 2019 tour, Chisholm described the experience as "mindblowing," adding: "It was so much better than we ever could have dreamed of. And we'd be absolute fools to not want to do that again."

She went on add that she is "always pushing" for another such tour and that they would like to perform in territories such as Southeast Asia and Australia.

The Spice Girls -- known for espousing "Girl Power" -- catapulted to fame in 1994 with their hit "Wannabe."

One of the highest-selling female groups of all time, they have sold at least 85 million records and topped the UK singles chart nine times with hits including "Wannabe," "2 Become 1" and "Spice Up Your Life."

The Spice Girls split in 1998 after Halliwell announced she was leaving in the middle of their world tour. They all went on to pursue solo careers.