'Melrose Place' actress headed back to prison for 2010 crash 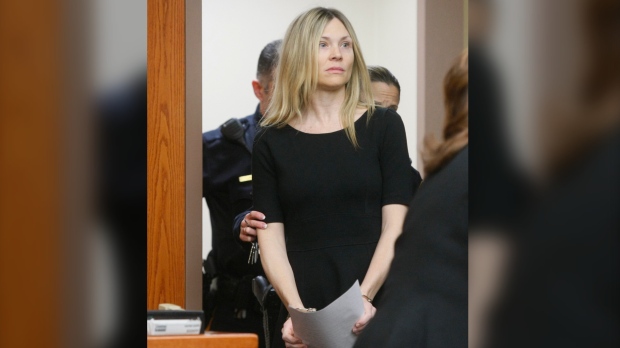 FILE - In this Feb. 14, 2013, file photo, Amy Locane enters the courtroom to be sentenced in Somerville, N.J. The former "Melrose Place" actress who has already served a prison sentence for a fatal 2010 drunken driving crash in New Jersey is headed back behind bars. A state judge on Thursday, Sept. 17, 2020, agreed with prosecutors that Locane's previous sentences were too lenient and gave the actress an eight-year sentence. (Patti Sapone/NJ Advance Media via AP, Pool, File

A former “Melrose Place” actress who has already served a prison sentence for a fatal 2010 drunken driving crash in New Jersey is headed back behind bars.

A judge agreed with prosecutors today that her initial sentence was too lenient.

State law requires her to serve more than six years before being eligible for parole.

Locane apologized to the Seeman family in a brief statement.

She was placed in handcuffs and taken into custody by court deputies after the proceeding in state court in Somerville.

It was a startling development in a case that has bounced around the New Jersey court system for nearly a decade and has now featured four sentencings in front of three judges, plus numerous appeals.

Locane - who acted in 13 episodes of the popular 1990s Fox series and has also appeared in several movies - was convicted on several counts including vehicular manslaughter, and faced a sentencing range of five to 10 years on the most serious count.

According to witnesses, Locane had consumed several drinks before she headed home on the night of the accident and slammed into the Seemans' car as it turned into their driveway in Montgomery Township, near Princeton.

The actress contended a third motorist, whose car Locane had bumped into at a traffic light minutes earlier, distracted her by honking at and chasing her.

Locane wasn't indicted for drunken driving, but a state expert testified her blood alcohol level was likely about three times the legal limit and that she was also speeding at the time of the crash.