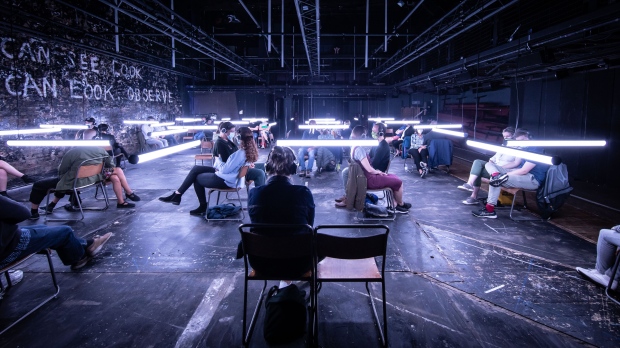 A scene from the theatre production 'Blindness,' is shown in a handout. Mirvish Productions is set to relaunch indoor theatre in Toronto with an audio-based stage show that has an eerily timely premise about a pandemic but was actually developed before COVID-19.THE CANADIAN PRESS/HO-Mirvish Productions-Helen Maybanks

TORONTO - Mirvish Productions is set to relaunch indoor theatre in Toronto with an audio-based stage show that has an eerily timely premise about a pandemic but was actually developed before COVID-19.

Mirvish says “Blindness,” which starts performances at the Princess of Wales Theatre on Wednesday, will be the first indoor theatre presentation in Toronto since the pandemic shut down such venues nearly a year and a half ago.

Audience members sit masked and socially distanced onstage with sanitized headphones as a recording of English actor Juliet Stevenson voices the narrator, who is the only character to retain her sight as a pandemic of blindness spreads in Europe.

Last Friday, Mirvish also announced it will stage two shows at the CAA Theatre this Saturday and Sunday featuring English comedy star Eddie Izzard, in Toronto lately to film an upcoming series. Profits made by the performer from “Eddie Izzard The Remix: 1988-2018” and a preview of “Charles Dickens' Great Expectations” will be donated to Indspire, a national Indigenous registered charity.

John Karastamatis, Mirvish's director of sales and marketing, says it will cost Mirvish more to put on shows than the company “could possibly make at the box office.”

But the theatre giant wants to start staging shows “slowly and cautiously,” to rebuild confidence in the hard-hit theatre community.

“It's very important to get them on as a starting point,” Karastamatis said in an interview. “You have to build again. It's almost like we're starting from scratch.”

Each Izzard show will play to 140 socially distanced audience members in a venue that holds 700.

“Blindness” will have 50 audience members per performance on a stage that's 18 metres deep by 25 metres wide, with a 37-metre high ceiling. The venue has a capacity of 2,000.

The show was originally supposed to arrive in Toronto in November but a new wave of the pandemic halted those plans.

Stephens said he adapted the show with director Walter Meierjohann a few years ago, first as an “operatic, balletic, choreographed” play with a large cast and chorus.

He saw it as an uplifting story of survival, as an unnamed European city sets up a mass quarantine in a hospital to try to contain infections.

The team did a workshop for the original version of the show in London in 2019 but “it was too big and expensive” to put on in that form, so they rewrote it as a one-woman play, said Stevenson.

Then COVID-19 hit and theatres closed, forcing the team to rethink the project as it took on a new level of resonance.

Stevenson said about two months into lockdown, they turned the play into a spatial sound installation that unfolds in a darkened auditorium with the binaural recording method.

Sound designers Ben and Max Ringham strategically placed microphones inside a fibreglass sculpture of a human skull on a pole to capture 3D stereo sound in a way a person would actually hear it.

Stevenson said she talked and moved around the recording room with the skull as if it were a co-star playing the role of her nurse-character's blind husband, who is a doctor.

When Stevenson whispers in each ear, that's how audience members hear it.

“You cannot believe there isn't somebody physically in the room,” said Stevenson, who has an extensive stage and screen career and is also known for her audiobook recordings in the United Kingdom.

“You can hear every breath, every footstep, every comment coming nearer, going away.”

Lizzie Clachan did the set design and Jessica Hung Han Yun did the lighting.

At the Princess of Wales, the show runs for 75 minutes and will not have an intermission. Audiences will sit in pods of one or two. Everyone in attendance, including staff, will be masked.

Karastamatis said a powerful air circulation system above the stage, which was previously there to combat heat from the lighting, serves as a bonus ventilation system “stronger than any that exists on an airplane.”

At the moment, Mirvish patrons do not have to show proof of vaccination like they do on Broadway, said Karastamatis. But the company will look at such a requirement for future performances that don't allow social distancing or other precautions, he added.

“What we need is an effective and legitimate passport, which doesn't exist right now,” said Karastamatis, noting “the government really needs to play a role.”

Mirvish has increased the number of performances of “Blindness” to 24 per week from 20 due to demand, said Karastamatis.

But Mirvish can't extend the run of “Blindness” because the Toronto International Film Festival booked the Princess of Wales theatre for screenings in September.

Stephens said the team wasn't sure if audiences would want to take in such dark material but the previews were met by rave reviews and “audiences were moved by its innate positivity and optimism.”

It was a “profound” experience, agreed Stevenson.

“For all the amazing, wonderful creative stuff going on on Zoom, there is nothing to replace human beings coming into a space together and telling and listening to stories as one,” she said.

“I think that by having theatre taken away from us, it's made us really clear what theatre is for and why people need it.”