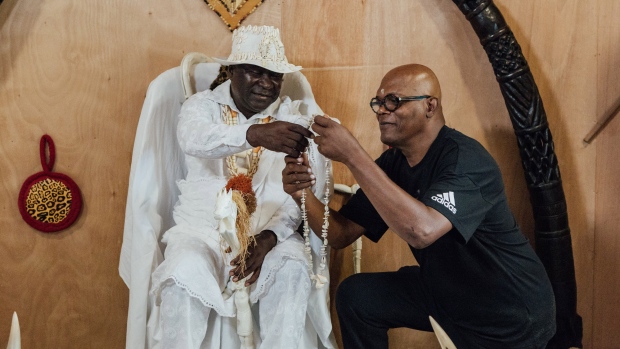 Samuel L. Jackson, right, is shown in this undated handout image from the program "Enslaved." COVID-19 and other hurdles stalled production on "Enslaved," which follows actor Jackson as he traces his roots and the tragedy of the sunken ships during the transatlantic slave trade. THE CANADIAN PRESS/HO- Courtesy Everett Collection-Â©Epix/AP Slave Ships Prod. Ltd./Cornelia Street's Ships

TORONTO - COVID-19 and other hurdles stalled production on “Enslaved,” which follows actor Samuel L. Jackson as he traces his roots and the tragedy of the sunken ships during the transatlantic slave trade.

But, as Canadian-Israeli director Simcha Jacobovici tells it, the timing of its premiere on the CBC and its Gem streaming service on Sunday “couldn't be better.”

“After the tragedy of George Floyd, right now the whole issue between identity and Black-white relations - except for COVID-19 - I think there's no other issue that's more pressing around the world,” Jacobovici said in a recent phone interview.

“The delay, I think, will make more people interested in this history. What might have been regarded as niche three years ago when we started is now very mainstream.”

Jacobovici and Jackson are also executive producers on the six-part project, which sees a team of divers examining sunken slave ships that had largely been previously unexplored on three continents.

Jackson, who studied marine biology before he became an actor, follows the team to what one person in the six-part documentary series calls “a burial ground and a crime scene” that many don't know about.

The Oscar-nominated “Pulp Fiction” star also travels to Gabon, a country on the west coast of Africa, to reconnect with his roots in the Benga tribe.

“It was very important for him to turn that journey from a personal odyssey into an opportunity to educate the planet about the transatlantic slave trade. He didn't want it to be just about him,” said Jacobovici, noting it was an emotional journey for Jackson.

“He was interviewed on 'The Daily Show' and they asked him, 'What did you feel?' and he said 'survivor's remorse.”'

Jacobovici said he had the idea for the Canada/U.K. co-production three years ago, after hearing about sunken slave ships from marine archaeologists while making the National Geographic documentary “Atlantis Rising,” executive produced by Canadian “Titanic” filmmaker James Cameron.

Jacobovici was shocked to learn that of the 12 million Africans trafficked over about 400 years, at least two million died at sea.

“As a child of Holocaust survivors, I take the words 'never again' very seriously,” said the writer-director-producer, who was born in Israel and has lived in Montreal and Toronto, where he started his company Associated Producers. He typically travels back and forth between Toronto and Israel, except during the pandemic.

Cameras follow a group from Diving With a Purpose, a non-profit organization dedicated to the conservation and protection of submerged heritage resources. The organization works in collaboration with The National Association of Black Scuba Divers.

Jacobovici used the diving footage as a springboard to tell a larger story of the economics and politics of the transatlantic slave trade. There's also an episode on African culture and another on Africans who resisted and fought for their freedom.

Divers in the “resistance” episode investigated the wreck of a “freedom boat” that's believed to have ferried African Americans to freedom in Canada through Ontario's Welland Canal.

“We could identify not only the captain, who was an abolitionist, but we ended up identifying the names of some of the Africans who were ferried by that boat to Canada,” Jacobovici said.

Jacobovici said one particularly heart-wrenching episode sees them visit a square in Lagos, Portugal, where the first enslaved Africans were sold. Nearby is a mass grave that's now covered by a mini-golf course.

“It's not just a job,” he said. “You're sitting there going, 'I can't believe I'm standing on a mass grave and there's no monument here, there's mini golf.”

In Brazil, they visited a wharf where four million people were processed.

“You're going into an area that's a kind of a memory black hole. We've suppressed it, we haven't really come to terms with it,” Jacobovici said.

“And I think if you want to understand what's going on in the streets of the United States and Brazil and all over, we've got to come to terms with what happened.”

Some of the footage also wound up coinciding with recent headlines.

In Bristol, England, they interviewed an activist at the base of a statue of 17th-century slave trader Edward Colston, before it was toppled by protesters this past June.

Meanwhile, the divers visited civil rights leader John Lewis, who was diagnosed with pancreatic cancer about a month later and died this past July.

“This happened over and over again, where the stuff we were addressing, like a mass grave being a golf course, was suddenly front-page news,” Jacobovici said.

Meanwhile, their trip to Gabon was delayed when members of the armed forces there attempted a coup to oust the president, who had also suffered a stroke around that time.

Then COVID-19 shut down production, forcing Jacobovici to find other ways to finish the project - all while the Black Lives Matter movement against racism picked up.

“We were just trying to keep one step ahead of all of this, the issues that were swirling around us,” Jacobovici said. “And we really felt a sense of responsibility, that we have something very important to contribute especially at the time. I still haven't digested it all.”