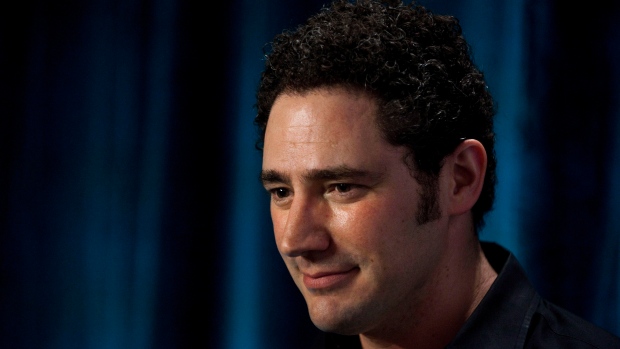 In this file photo, writer Elan Mastai speaks with media at a press conference to announce the line-up of Canadian films that will be screened at the Toronto International Film Festival, in Toronto on August 7, 2013. THE CANADIAN PRESS/Galit Rodan

TORONTO - Vancouver-raised “This Is Us” screenwriter and producer Elan Mastai has a running joke with his two sisters about what story from their past will turn up on the hit family series.

“Literally after every episode, my little sister calls me and we go through the episode and she guesses the things that were inspired by stuff from our life,” Mastai said in a recent phone interview.

“And it's not just my sisters,” he said. “I get these texts after the episodes air from people like, 'Was that from this? Was that inspired by this?”'

Like the Pearsons on the show, which airs Tuesdays on CTV and NBC, Mastai comes from a family with three siblings. He's also of the same generation as the Pearson trio, and has two young girls the same age as those of character Randall, played by Sterling K. Brown.

Also like the Pearson siblings, Mastai knows the ongoing existential grief from the loss of a parent. In the Pearsons' case, it's patriarch Jack, played by Milo Ventimiglia. For Mastai, it was his mother, who died in 2001.

Mastai said he thought of his late mother when writing last season's episode “Sorry,” which he jokes is titled as such because he's Canadian. The episode sees matriarch Rebecca, played by Mandy Moore, making the bed with Jack in the past and later with son Randall in the present.

“I used to always make the bed with my mom and we would have these conversations while we did it,” recalled Mastai, who also wrote the 2013 romantic comedy film “The F Word” (a.k.a. “What If?”) and the 2017 novel “All Our Wrong Todays.”

Mastai said the episode he wrote for this Tuesday has a theme of “how hard is too hard?” and was inspired by the experiences he and his wife have had raising their girls, ages 8 and 12.

He can't reveal much about its contents but promised it has “a big surprise” the writers have been planning for about a year.

This season the Emmy-and Golden Globe-winning series is addressing both the pandemic and current social justice issues, including the Black Lives Matter movement.

Mastai said the writers' room has scribes of many different backgrounds and ages, who all bring their own experiences to the storylines. They felt a responsibility to “use this unprecedented moment to continue to tell compassionate stories about what it's like to be a family now.”

“We're in such an interesting position to talk about what is important to people right now, and to do it through characters that you already know and care about,” Mastai said, pointing to Randall's family and his experience growing up Black in a white family.

Critics have praised the way the show has handled Randall's conversations about race with his siblings.

The show has also made headlines this season for a mysterious, major plot twist involving Randall's biological mother. Mastai promises they won't drag out that storyline for two seasons.

“Everything you want to know, you will know very soon,” he said. “It's going to be very unexpected and it's going to be really beautiful, and I'm so excited for audiences to find out what we planned for them.”

Mastai joined “This Is Us” last season after the producers got in touch with his agent saying they liked his work.

He was already a huge fan of the show and moved with his wife and daughters to Los Angeles so he could work on it. The family still has a home in Toronto.

It's been a big life change -- one that is reflected in the show, he said, noting Randall's move to Philadelphia to start a new job as a city councillor echoes his own career and life changes working in L.A.

“Part of the fun of working on a show like 'This Is Us' is that you, on so many different levels, bring your own life and your own history and your own experiences,” Mastai said, “and then you see them filtered through the cracked fun-house mirror of television storytelling and they become part of the lives of the Pearsons.”

This report by The Canadian Press was first published Nov. 16, 2020.