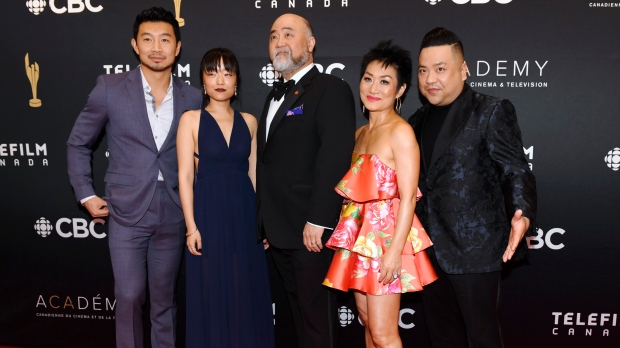 The cast of "Kim's Convenience" arrives on the red carpet for the 2019 Canadian Screen Awards in Toronto on Sunday, March 31, 2019. THE CANADIAN PRESS/Nathan Denette

TORONTO - Stars of “Kim's Convenience” say they're “heartbroken” after news the hit Canadian sitcom is set to close up shop after its fifth season.

The show's producers say the CBC series, which has earned a global following on Netflix, will come to an end on April 13 with the final episode of the current season.

It's a full season shorter than what was planned in early 2020 when the comedy was renewed for two additional seasons at the CBC.

The producers said the decision comes after the show's two co-creators, Ins Choi and Kevin White, confirmed at the end of production on season 5 that they were moving on to pursue other projects.

“Given their departure from the series, we have come to the difficult conclusion that we cannot deliver another season of the same heart and quality that has made the show so special,” the producers said in a statement Monday.

Lee stars as patriarch Appa, alongside Yoon as matriarch Umma.

“I'm heartbroken. I feel like my journey with Jung was cut short,” Liu, star of Marvel's upcoming film “Shang-Chi and the Legend of the Ten Rings,” tweeted Monday.

“I feel like you, the fans, deserved better. But I'm proud of all that we accomplished together in five seasons. Thanks for all your love and support. This isn't goodbye, only #OKSeeYou.”

Lee, whose character was known for saying “OK, see you” as a farewell to customers, tweeted: “Heartbroken. More on this later.”

A representative for the show, responding to an interview request, said they “have nothing more to add beyond the statement at this time.”

“Kim's Convenience” premiered on CBC in the fall of 2016 and is based on the award-winning Canadian play by Choi. It's won several Canadian Screen Awards, including best comedy.

The series is produced by Ivan Fecan and co-created by Choi and White on behalf of Thunderbird Entertainment, in association with the Soulpepper Theatre Company.

The show was heralded for its storytelling, diversity and representation.

Yoon called the five seasons they had “incredible.”

“Thanks and gratitude to all the incredible artists, crew, writers, producers and fans who have come together to tell this story and celebrate this family,” she wrote on Twitter.

Sally Catto, general manager of CBC's entertainment, factual and sports divisions, said the show has connected with audiences around the world.

“While we are sad to say goodbye to this beloved and groundbreaking show, we are incredibly proud to have been part of its journey and understand the producers' creative decision to wrap up the show at this time,” Catto said in the statement.

Season 5 was filmed last fall under COVID-19 protocols in Toronto. Liu was in Australia shooting his role as Marvel's first big-screen Asian-American superhero in “Shang-Chi and the Legend of the Ten Rings” when the pandemic hit and couldn't get back to Toronto to shoot “Kim's Convenience” until near the end of production.

“Without 'Kim's Convenience,' there's no way that I'm here today,” Liu said in an interview when he first landed the Marvel role. “They've given me an incredible opportunity to hone my comic skills and comedic timing over the four seasons that I've been here. And it's never felt like a day of work.”

The final season dives deeper into the family dynamics, including the parents, who grapple with a health issue faced by Yoon's character.

“It does make for some really compelling storylines and some heart,” Lee said in a recent interview.

“That's one of the big things that separates 'Kim's,' I think, from a lot of other sitcoms, is there is a tremendous amount of love and heart in it.”

- With files from Adina Bresge

This report by The Canadian Press was first published March 8, 2021.