From twisty thrillers to a Mob epic: a roundup of streaming offerings in November 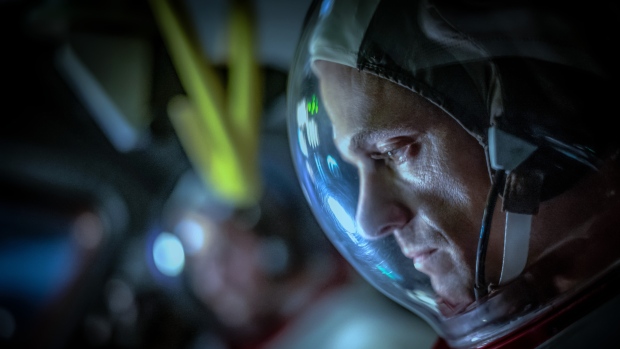 Actor Joel Kinnaman is shown in a scene from "For All Mankind" in this handout photo. Whether you're hunting for prestige drama or nail-biting action, narrowing down your November streaming TV options won't be easy. THE CANADIAN PRESS/HO, Apple TV Plus

TORONTO - Whether you're hunting for prestige drama or nail-biting action, narrowing down your November streaming TV options won't be easy.

Apple TV Plus and Disney Plus join the growing number of companies vying for viewers' attention this month, and both are putting major hype behind their offerings.

Apple kicks off the month with an ambitious slate of programs, including the Jennifer Aniston and Reese Witherspoon workplace drama “The Morning Show,” which debuts on Nov. 1. Disney follows with a massive library of classics and a live-action remake of “Lady and the Tramp,” launching Nov. 12.

But the established players aren't sitting back either.

Netflix flies the Fab Five overseas for “Queer Eye: We're in Japan,” while Amazon Prime Video continues the thrills with a second season of “Tom Clancy's Jack Ryan,” both due on Nov. 1.

Here's a look at several other film and TV series worth adding to your must-see lists:

Taking inspiration from the limitless minds at NASA, the creators behind “Battlestar Galactica” imagine a world where America lost the space race. The period drama begins as U.S. astronauts bungle the moon landing and watch as the Soviets beat them to the claim. The pivotal moment puts a spin on everything that comes after it, forcing NASA to reconsider space exploration, and revamp its program to bring in fresh talent. “For All Mankind” is a big-budget series with considerable ambitions set to the tune of a late-1960s and early-1970s soundtrack. But its alternate timeline also offers a pathway into exploring the wonderment that could've been, if only a few tweaks were made to the universe. (Apple TV Plus, Nov. 1)

“They Shall Not Grow Old”

Peter Jackson's documentary passion project brings a new life to previously unseen First World War footage in a moving tribute that's suited for Remembrance Day. Pulling from hundreds of hours of black-and-white archival films, Jackson colourized the old footage, added voice actors and layered in sound effects to bring a heightened realism to the lives of soldiers on the front lines. Past interviews with war veterans carry along the inventive narrative, giving renewed strength to a period of history that's been retold in countless other documentaries. (Crave/HBO, Nov. 11)

The less you know about executive producer M. Night Shyamalan's weird housebound thriller, the better its twisty plotline will play out. The episodic series follows a wealthy couple - he's a respected chef and she's a local TV reporter - who hire a young nanny to help care for their newborn child. But there's secrets underneath the surface of their home lives that slowly begin to trickle out. Filled with tension that evokes Alfred Hitchcock and surprises worthy of Shyamalan's breakout “The Sixth Sense,” this psychological delight could become the sleeper hit of Apple's new service. “Servant” stars Toby Kebbell (“Black Mirror: The Entire History of You”), Lauren Ambrose (“Six Feet Under”) and Rupert Grint of the Harry Potter series. (Apple TV Plus, Nov. 28)

Adam Driver delivers a dogged performance as U.S. senate staffer Daniel Jones in a simmering thriller about his investigation into the CIA's gruesome torture techniques after Sept. 11. The film painstakingly recounts the backroom wrangling and political red tape Jones faced as he waged a battle against the White House's attempts to keep his extensive report from being made public. A supporting cast that includes Jon Hamm as chief of staff Denis McDonough and Annette Bening as senator Dianne Feinstein, lend an extra level of gravitas to a damning examination of the walls dividing power and truth. (Amazon Prime Video, Nov. 29)

Martin Scorsese's sprawling mobster epic cost nearly $160 million to make and Netflix hopes to make every penny count as it rides towards the Oscar in hopes of cashing in on their investment with a best picture nomination. The three-and-a-half-hour film marks the first time Scorsese has joined Robert De Niro and Al Pacino on a project together. The story uses cutting-edge de-aging technology to tell the story Frank Sheeran (De Niro) through the decades as he goes from Second World War veteran to hustler and hitman. (Netflix, Nov. 27)

Renowned chef David Chang, founder of the Momofuku restaurant brand, slides deeper into his food obsession with a four-part travel series where he pairs with a Hollywood celebrity to explore a city's delicious eats and cool sites. “Saturday Night Live” comic Kate McKinnon heads with Chang to the streets of Phnom Penh, Cambodia, in one episode, but it's the one with Canadian comic Seth Rogen touring Chang around his childhood stomping grounds in Vancouver that's the real standout. The two start by smoking some of Rogen's potent weed before setting out on a journey through the city's diverse cuisine. They wind up at the Vancouver Aquarium where they meet octopus Ceph Rogen, whose name was picked after a landslide win in an online poll.

New Zealand's comically unhinged actor/director Taika Waititi is rolling out his latest film “Jojo Rabbit” in theatres across the country, after it picked up the People's Choice Award at the Toronto International Film Festival. But the relative newcomer to mainstream cinema has a decade of coming-of-age films worth checking out. Start with “Boy” (Amazon Prime Video), the semi-autobiographical comedy about a youngster whose relationship with his estranged criminal father is tested when he returns home in search of a hidden bag of money. Then hop over to “Hunt for the Wilderpeople” (Netflix), a quirky story about a boy and his foster father, played by Sam Neill, who wind up lost in the bush, become the subject of a misunderstanding and spark a nationwide manhunt. Wrap up your Waititi triple bill with “Thor: Ragnarok” (Netflix), the director's first foray into the Marvel universe that's a colourful and subversive spin on the mythical superhero.

This story by the Canadian Press was first published Oct. 31, 2019.