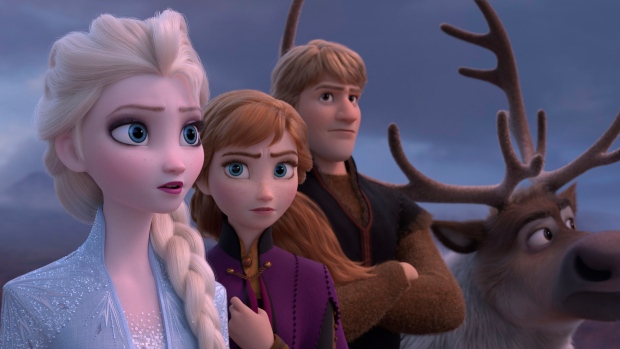 This image released by Disney shows Elsa, voiced by Idina Menzel, from left, Anna, voiced by Kristen Bell, Kristoff, voiced by Jonathan Groff and Sven in a scene from the animated film, "Frozen 2." (Disney via AP)

NEW YORK - “Frozen 2” blanketed multiplexes for the third straight weekend, continuing its reign at No. 1 with $34.7 million in ticket sales, according to studio estimates Sunday.

The Walt Disney Co. animated sequel has already grossed $919.7 million worldwide. It will soon become the sixth Disney release this year to cross $1 billion, a record sure to grow to seven once “Star Wars: The Rise of Skywalker” hits theatres later this month. Early next week, Disney will cross $10 billion at the global box office this year.

But the weekend overall at the box office was yet another disappointing one for the movie industry. A handful of under-performing releases and a relatively thin wide-release schedule have only grown the roughly 7% slide in domestic ticket sales from last year.

This weekend produced an outright flop in “Playmobil: The Movie,” the week's only new wide release. The STX Films release was never expected to do well, but it bombed so thoroughly that it will rank among the worst-performing wide-releases ever. It grossed $670,000 in 2,337 venues, giving it a per-theatre average of just $286.

A handful of companies combined to produce the $75 million French film, including Wild Bunch and Pathe.

The top five films were almost unchanged from last weekend.

Rian Johnson's acclaimed, star-studded whodunit “Knives Out” remained in second place with $14.2 million, declining a modest 47% in its second week of release. With $63.5 million cumulatively and $124.1 million worldwide, the Lionsgate release has been one of the season's bright spots.

So has James Mangold's “Ford v Ferrari,” which stayed in third place with $6.5 million over its fourth weekend. The racing drama, starring Matt Damon and Christian Bale, has sped to a global take of $168 million for Disney, which acquired the film's original studio, 20th Century Fox, earlier this year.

Melina Matsoukas' outlaw romance “Queen & Slim” moved up to fourth in its second week with $6.5 million, swapping places with Marielle Heller's Mister Rogers drama “A Beautiful Day in the Neighborhood” ($5.2 million in its third weekend).

Celine Sciamma's acclaimed period romance “Portrait of a Lady on Fire” opened at two locations with a very strong $33,552 per-theatre average. Neon will release the French film wider in February.

Some of the weekend's most widespread movie watching may have been on Netflix, though the streaming service doesn't disclose viewership tallies or box-office receipts.