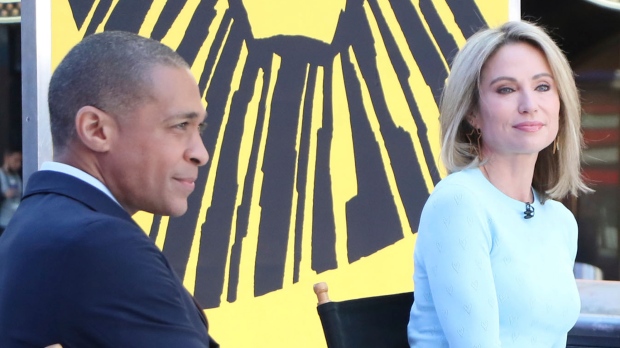 Amy Robach and T.J. Holmes, co-hosts of ABC News' "GMA 3," have been taken off the air following the public disclosure of a romantic relationship. RW/MediaPunch/IPX/AP

Amy Robach and T.J. Holmes, co-hosts of ABC News' "GMA 3," have been taken off the air following the public disclosure of a romantic relationship, network President Kim Godwin announced to staffers on Monday morning, according to a person familiar with the matter.

"I'm going to talk about something that has become an internal and an external distraction: The relationship between two of our colleagues," Godwin said. "And so, I want to say that while that relationship is not a violation of company policy, I have really taken the last few days to think about and work through what I think is best for the ABC News organization. And so, for now, I am going to take Amy and TJ off the air, while we figure this out."

Godwin added such decisions "are not easy, they're not knee jerk, but they are necessary for the brand." She also asked staff to "stop the whispering in the hallways" about the matter.

"We can't operate with gossip, and speculation and rumors," she said. "We need to stay focused on the work."

Godwin said, however, that if staffers think there is something management needs to know, they should contact human resources or a manager that they trust.

The move comes after the Daily Mail last week reported the two anchors have secretly engaged in a months-long romance, publishing photos of the pair together.

It was not immediately known who would fill in to anchor the news program, that airs weekdays at 1 p.m. ET.

People familiar with the matter previously told CNN that when the Daily Mail first reached out to ABC News for comment about the relationship between Robach and Holmes, a surprised network spokesperson tried to determine whether the allegation was true. The spokesperson contacted Holmes, who poured cold water on the tabloid's reporting.

That resulted in the spokesperson trying to push back against the outlet's reporting. The Daily Mail wasn't deterred and published its explosive story. When ABC representatives later saw the images included in the Daily Mail's story, they were taken aback, the people familiar with the matter said.

ABC News declined to provide a comment on the matter.

Following reports of the relationship, Robach and Holmes continued to anchor the program. But Monday's announcement suggests the network is taking the situation seriously.