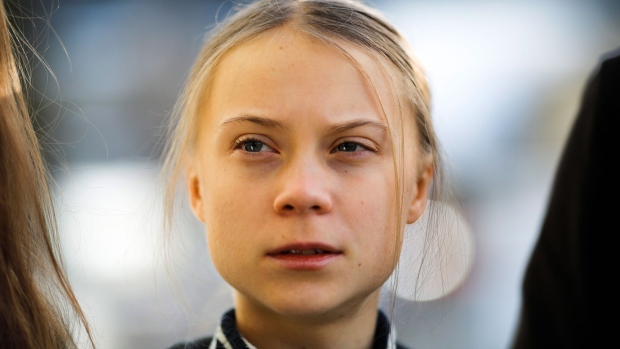 NEW YORK - Greta Thunberg turned 18 in January, but she's already made peace with her future: While most college students will change their concentrations multiple times, the Swedish high school student says climate change activism will be her life's mission.

She says in a perfect world, there wouldn't need to be a climate activist, but unfortunately, there will probably still be a need for climate activists for quite some time.

Thunberg's activism and message is brought to life in a new docuseries, “Greta Thunberg: A Year to Change the World.”

The three-part series, a co-production between P-B-S and B-B-C Studios premiering Thursday on Earth Day, follows the then-16-year-old as she took a gap year from school in 2019 to meet with scientists around the world and spearhead awareness about climate change.

The docuseries shows her visiting people and places that have been distinctly affected by the heating of the Earth, such as Canada's Athabasca Glacier, a town in California burned by wildfires and the indigenous Sami herders in Sweden where reindeer face starvation.

She even sails across the North Atlantic during the ocean's busiest season to experience how carbon dioxide emissions from ships have altered the chemistry of the ocean.

“A Year to Change the World” also gives a behind-the-scenes look at her speaking at massive rallies, and also reveals how the 2020 Nobel Peace Prize nominee's momentum was significantly slowed by the worldwide coronavirus pandemic.

Thunberg has taken jabs from many heads of government, who have have positioned her as a political lighting rod and inadvertently raised her global profile.

Brazil's conservative president Jair Bolsonaro has called her a “brat,” Russian President Vladimir Putin has said she doesn't understand that the “modern world is complex,” and former president Donald Trump mentioned her at rallies, which resulted in cascades of boos.

He even famously tweeted, “Greta must work on her Anger Management problem, then go to a good old fashioned movie with a friend! Chill, Greta, Chill!”

Thunberg, the youngest person ever to receive Time's Person of the Year honour in 2019, said she doesn't fully understand why she's on the radar of government officials, but it shows that the message of climate change is reaching far and wide.