'I don't know where we will do this': Kimmel to host Emmys, first major awards show of pandemic 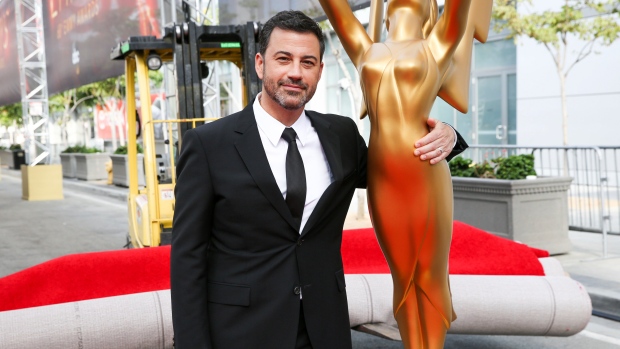 This Sept. 14, 2016 file photo shows host Jimmy Kimmel posing for a photo with a replica of an Emmy statue at the Primetime Emmy Awards Press Preview Day in Los Angeles. (Photo by Rich Fury/Invision/AP, File)

LOS ANGELES - Jimmy Kimmel will host the first major Hollywood awards ceremony of the coronavirus pandemic - but just how the Emmys will be held remains cloudy.

Kimmel, who is also producing the Sept. 20 ceremony on ABC honouring TV's best, acknowledged that in Tuesday's announcement.

The network said details on the show's production will be announced soon. Choosing Kimmel to emcee the ceremony reverses course from last year's no-host Emmys.

The entertainment industry is just beginning to restart production following a months-long shutdown aimed at curtailing the spread of COVID-19. Orchestrating an awards ceremony during the ongoing pandemic with its crowd of presenters, nominees and guests is a daunting prospect, whether done virtually or otherwise.

While the Emmys are plunging ahead as scheduled, other ceremonies are bowing to the pandemic's pressures. The 93rd Academy Awards will be held April 25, 2021, eight weeks later than planned, and the British Academy Film Awards is shifting its originally announced February 2021 ceremony to April 11.

The Emmy Awards are considered a kickoff for the new TV season that traditionally begins in September, although virus-caused production delays have raised questions about whether shows will be ready to air as planned.

Nominations for the 72nd prime-time Emmys will be announced by the TV academy on July 28.