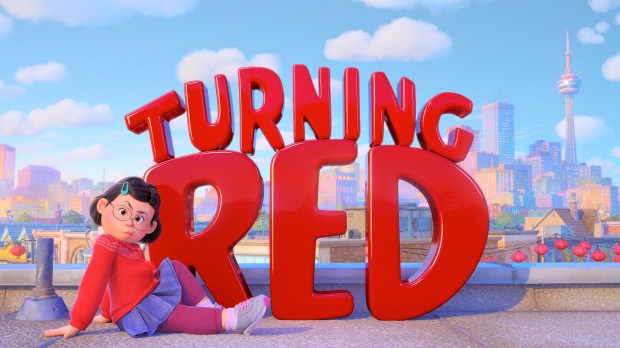 A still image from Disney and Pixar's all-new original feature film 'Turning Red' is shown in this handout image. THE CANADIAN PRESS/HO-2021 Disney/Pixar

Streetcar tracks, the CN Tower and graffiti-covered alleyways are among the Toronto hallmarks featured in an upcoming Disney and Pixar film billed as a love letter to Canada.

Disney says “Turning Red,” set for release in March 2022, takes place in Toronto, is directed by Canadian Oscar-winning director Domee Shi and features Ottawa-born Sandra Oh as one of the voice actors.

The animated movie follows the story of a 13-year-old girl who transforms into a giant red panda when she gets too excited.

Shi won an Oscar in 2019 for the animated short film “Bao,” which she wrote and directed and also set in Toronto.

“There are a couple of great Canadian Easter eggs in this trailer and we can't wait for Canadian audiences to see more when the film hits theatres next year,” Mason said Tuesday in a release.

This report by The Canadian Press was first published July 13, 2021.