‘Jagged’ looks back at Alanis Morissette’s creation of iconic album, singer’s meteoric rise in the 90s 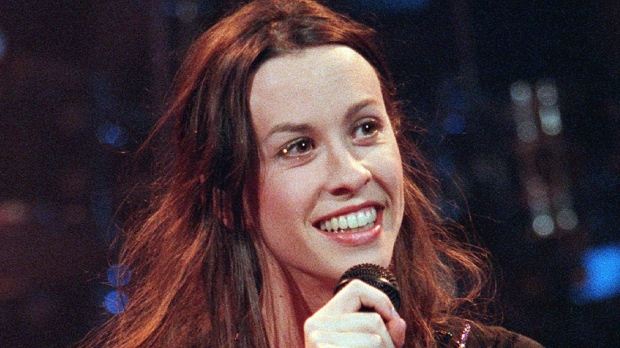 Alanis Morissette smiles at the audience applause during her performance at MuchMusic's studio in Toronto Sunday Nov. 1, 1998. (Kevin Frayer / The Canadian Press)

A new documentary that looks back on Alanis Morissette's rise to fame and wild success 25 years after the 1995 release of her hit album Jagged Little Pill debuts on Crave this weekend.

Making use of archival footage, as well as one-on-one interviews with Morissette and those close to her, director Alison Klayman explores the creation and subsequent success of her blockbuster album, Jagged Little Pill and how it captured the world in the 90s, catapulting Morissette to worldwide fame.

Jagged premiered at the Toronto International Film Festival earlier this year. But just ahead of its premier, Morissette issued a statement slamming Klayman and the film, saying that it was “reductive” and not the project she had agreed to.

The singer said it contains facts and implications that were untrue, but did not specify what she was referring to.

The film traces Morissette’s early career as she attempts to become a famous singer, from early pop efforts where she is barely recognizable to the angry and passionate young singer many people still picture her as.

While it is not clear exactly what angered Morissette, the film covers a number of sensitive topics, including admissions that bandmates used the promise of meeting the iconic singer to lure wide-eyed fans for hook-ups, as well as a suggestion that there was friction from some bandmates over Morissette’s billing as a solo star.

At one notable point in the film when she's being asked about encounters she had with much older men in her teens, Morissette says she's going to need help "because I never talk about this shit."

She then goes on to say that while she didn't think so at the time, in retrospect she sees those men as pedophiles and now realizes the encounters were instances of statutory rape.

In her statement just before the Jagged premier, Morrissette called the film “salacious” and said it differed from the story she thought was being told.

“I agreed to participate in a piece about the celebration of Jagged Little Pill’s 25th anniversary, and was interviewed during a very vulnerable time (while in the midst of my third postpartum depression during lockdown),” she wrote. “I was lulled into a false sense of security and their salacious agenda became apparent immediately upon my seeing the first cut of the film. This is when I knew our visions were in fact painfully diverged. This was not the story I agreed to tell.”

Klayman has previously tackled docs on subjects such as Trump adviser Steve Bannon and Chinese artist and activist Ai Weiwei.

For Jagged, she had numerous virtual and in-person meetings with Morissette.

Earlier this year, before Morissette panned the doc, Klayman spoke at a virtual TIFF industry event and shared some of her thinking around the project.

She said that with any subject, it is her job to avoid telling a “manicured lie” but at the same time she does not see her job as a documentarian as being there to “crack open” a subject’s psychology.

“I don't remember craving or needing to know more (about Morissette) and I was like too young to go to a concert or I wasn't cool enough to go to a live show so my interaction was really with the album,” she said of how she came to Morissette’s music as a teen. “So I felt like looking into the story of how the album got that big, and was really, you know, the first thing on my list. But more than that, when I started one of my guiding questions was just like, what was feminism in the 90s? Like that was sort of, you know, I think one of the top guiding questions.”

She said she was also intrigued by the question of how the album got so big and what it means looking back at it from 2021 from a distance of 25 years.

There are interesting tidbits along the way for those who followed Morissette or her music and much of the archival footage was filmed by Morissette herself.

The film offers a window into the process that went into the creation of some of the singer’s most recognizable hits, along with insights about how she dealt with her quick rise to stardom.

It also offers a tender snapshot of young musicians on tour, working and partying together on a wild ride they know they will never replicate.

The film is also filled with music from the iconic album.

Anyone with even a few memories from the 90s will likely be able to sing along to some of the ubiquitous tunes, from the rage anthem “You Oughta Know” to mellow and insightful numbers like “Ironic” and “Hand in My Pocket.”

Both CP24 and Crave are divisions of Bell Media

Alanis Morissette arrives at the 2015 MusiCares Person of the Year event at the Los Angeles Convention Center in Los Angeles, on Friday, Feb. 6, 2015. (Richard Shotwell / Invision)

Artist Alanis Morissette receives her achievement from the Canadian Music Hall of Fame during the 2015 Juno Awards in Hamilton, Ont., on Sunday, March 15, 2015. (THE CANADIAN PRESS/Nathan Denette)