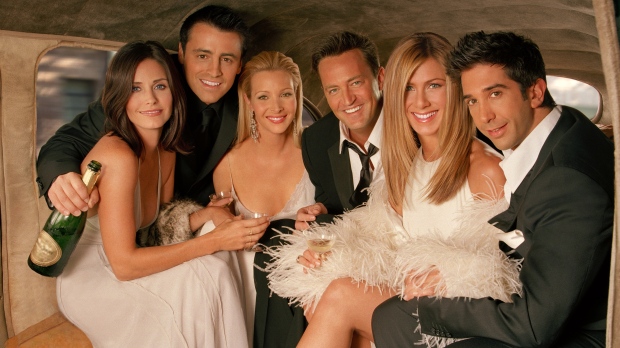 The cast of "Friends" is shown in this undated handout photo. Hit sitcom "Friends" is headed to Crave on Dec. 31 as the streaming company picks up the exclusive Canadian streaming rights. THE CANADIAN PRESS/HO - Bell Media

TORONTO - Netflix Canada will bid farewell to “Friends” later this month as the hit sitcom moves to Crave.

Both streaming platforms confirmed the switch on Tuesday, saying Dec. 31 will see all 10 seasons of the show depart Netflix for their new home on Crave under an exclusive agreement.

The change comes as Crave continues to bulk up its streaming library of hit network TV comedies, which include “30 Rock,” “The Bernie Mac Show” and “Frasier.”

The streamer, owned by Bell Media, also recently picked up the rights to “The Fresh Prince of Bel-Air,” which will leave Netflix on Dec. 30.

Netflix isn't left empty-handed when it comes to classic TV, however. The company says it will have the Canadian streaming rights to “Seinfeld” starting next year.

CP24 is a division of Bell Media.