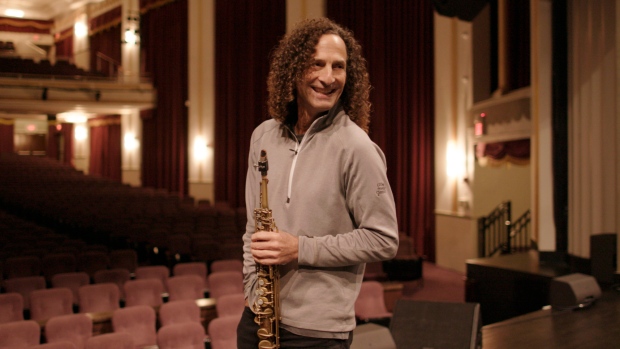 This image released by HBO shows Kenny G. in a scene from the documentary "Listening to Kenny G," streaming Dec. 2 on HBO Max. (HBO via AP)

NEW YORK (AP) - Kenny Gorelick, known to millions as Kenny G, has been one of the most beloved - and hated - figures in music throughout the last three decades. But the music superstar, synonymous for his long, curly brown hair as much as for his soprano saxophone, has ignored his critics and remained largely unbothered, well before the term was a popular social media hashtag.

“If you're going to criticize me, I'm just not going to go with that because I already know that I'm doing my very, very best. So, there's where the confidence comes from,” said the Grammy winner. “Did it ever really hurt me? Honestly, no. Because I've got my armor of knowing I'm doing my very, very best. That's why I practice every day... I'm never a little rusty - ever.”

Kenny G's unconventional journey to the top - and the jazz purists' feathers he's ruffled along the way - is explored in the new documentary “Listening to Kenny G” directed by Penny Lane, which premieres Friday at 8 p.m. EST on HBO. In addition to the criticism, the film details his Seattle upbringing, being discovered by legendary music executive Clive Davis, and the massive success of hit songs like “ Silhouette,” “ Songbird ” and “ Sentimental.”

The Associated Press spoke with Kenny G, who will also release a new album called “New Standards” on Friday, about his participation in the film, his legacy, and working with current megastar artists like Kanye West and The Weeknd. Answers have been edited for clarity and brevity.

AP: The film opens up with some very harsh criticism of you, but you seem to have tough skin. Was there ever a time it bothered you?

KENNY G: Since the '80s, I've always thought of it kind of this way: They don't particularly like my style of music. So the songs I put out, especially once they got popular- of course, once they got popular - they hated it moreâ€¦ They're just thinking that maybe I'm just creating these melodies because I know somehow it's going to sell records and I'm going to be rich and famous because of this, which I had no idea of. I'm just playing songs the way that I hear them. I love a melody that's played properly.

AP: What convinced you to participate in a documentary with Penny Lane?

KENNY G: She was not necessarily a fan of my music, which I thought was cool that she said that right off the bat. But not that she didn't like it, she just wasn't this big fan that wanted to make a movie about me. She just said that there's a story to tell about how “there's a group of people that really have a problem with your success. And I'd like to tell that story.” I said, “I've been hearing that since the '80s.”

AP: Because you've faced so much criticism from jazz purists, do you think you've influenced up-and-coming jazz artists?

AP: You've connected with Kanye West and the Weeknd. Is that how you've stayed current?

KENNY G: I'm really flattered when I get those phone calls from Kanye and then The Weeknd, of course. It makes me feel great that somehow they want my sound to be part of their music. And they're so popular now - they don't need me. I'm not doing them a big favor. They're not reaching out to me so I can help them sell records. They're just doing it purely because creatively, they think, “Oh, wow, (we love) your sound.”

AP: Kenny, what do you think your legacy will be? I think the documentary leads to that question.

KENNY G: Gosh, I've never even thought about something like that. I don't think of myself so seriously to have a legacy. But I mean, I don't know - hopefully it inspires people to want to play the saxophone... Maybe part of my legacy is people really interested maybe more in me because of the notoriety that I have, but maybe I can steer them towards some of the old traditional jazz stuff that they may not have ever heard, and I can keep that music alive longer. ---