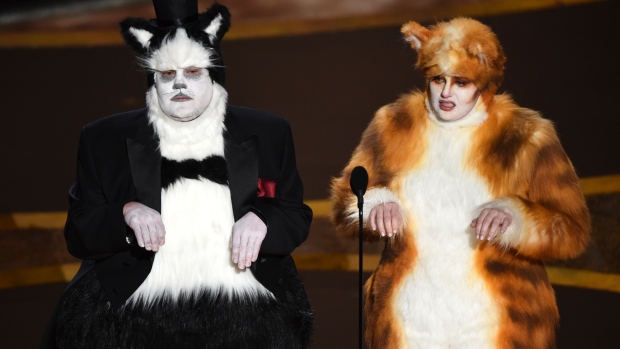 James Corden, left, and Rebel Wilson present the award for best visual effects at the Oscars on Sunday, Feb. 9, 2020, at the Dolby Theatre in Los Angeles. (AP Photo/Chris Pizzello)

NEW YORK - Without a host or a great deal of pizzazz, ABC's telecast of the Academy Awards reached its smallest audience ever of 23.6 million viewers.

The Nielsen company said Sunday night's audience was down 20 per cent from a year ago. The previous low-water mark for the Oscars was the 26.5 million people who watched in 2018.

In Canada, CTV says the broadcast attracted an average of 4.6 million viewers. That's down from last year, when 5 million people tuned in.

The Academy Awards honoured “Parasite” as best picture. While that made history as the first-ever foreign language film to win the top award, it was clearly not an audience-grabber. The Oscars were held sooner in the year than usual, and that may have prevented the show from building buzz.

“It was too predictable, too white and too boring,” said Tom O'Neil, founder of Goldderby.com, a website devoted to awards show news.

The actors who took the four biggest prizes - Joaquin Phoenix, Renee Zellweger, Brad Pitt and Laura Dern - had also swept previous awards, so there were few surprises and few indelible moments, he said on Monday.

“The only suspense of the evening was for best picture, and the average viewer hadn't seen `Parasite' or `1917,' so they weren't emotionally invested,” O'Neil said.

For the second straight year, the Oscars went hostless, opening with a rousing production number from Janelle Monae and a crisp comic monologue with Steve Martin and Chris Rock. But a handful of critics felt the lack of host was a handicap this year.

Dominic Patten of Deadline said the show “bellowed out for a ringmaster to harness what soon became a lacklustre circus.”

“One thing a host can do is give the broadcast a shape and a voice when nothing else provides them,” wrote James Poniewozik of The New York Times. “And this year's show seemed to feel the vacuum more, turning out a grab bag of emotional high points and perplexing uses of time.”

Hank Stuever, critic for the Washington Post, said the show was too predictable. He called it “Oscar autopilot - three and a half hours of Hollywood cruising along at 35,000 feet. Viewers could be forgiven for nodding off for most of the flight.”

“I missed having a host,” Joy Behar said on “The View.”

For much of the 2000s, the Oscars hovered between 35 and 45 million viewers, often the second most-watched television program of the year after the Super Bowl. As recently as 2015, the show reached 37.3 million viewers.

In defence of the motion picture academy, live television viewing in general has dropped significantly over the past few years with the explosion in streaming services. Still, the numbers have to be concerning.