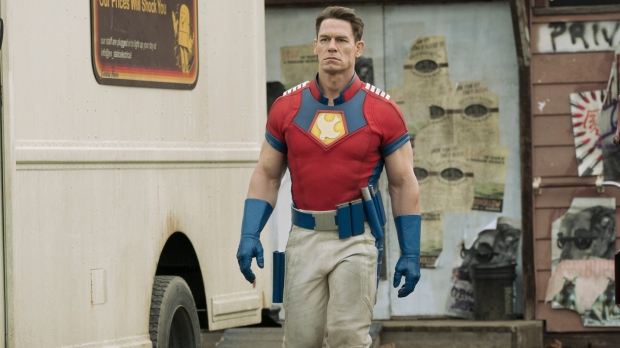 This image released by HBO Max shows John Cena in a scene from the series "Peacemaker." (HBO Max via AP)

NEW YORK (AP) - In last year's “The Suicide Squad,” John Cena's Peacemaker is a jingoistic, bigoted superhero. Transferring the DC Comics character to a TV series spinoff gave writer-director James Gunn a forum to hold the flawed character to the light in these days of political divide.

Cena, one of the biggest stars of World Wrestling Entertainment, said he was used to playing a loud-mouthed character, with a slight caveat - his wrestling persona was moral.

“He was as close to a real-life superhero, that character, as you can get,” Cena said in a recent interview. “His core value is virtue.”

But “peacemaker is flawed and shattered,” said the actor who was in the cast of '“F9: The Fast Saga.” Cena says it was “liberating” to explore such “non-virtuous behavior” in the Peacemaker character, yet despite his attempts at good deeds, he was unsure if the character was redeemable.

“We see him do this just dastardly nefarious stuff in `The Suicide Squad,”' Cena said. “Peacemaker has a lot of work ahead of him if he's brave enough to face the man in the mirror.”

Being able to play that kind of anti-hero in the “Peacemaker” series, now streaming on HBO Max, might be Cena's biggest challenge to date, but Gunn was sure he'd be up to it.

Gunn said he sees a strong screen presence in Cena and more: He describes it as an ability “to express a depth of emotion that is rare in actors, much less wrestlers turned actors.”

Writing all eight episodes, and directing five, Gunn had the chance to introduce more political elements than in “The Suicide Squad.” To add further layers, Gunn partners Peacemaker, aka Christopher Smith, with his diametric opposite, Leota Adebayo, played by Danielle Brooks (“Orange is the New Black”).

“I wanted to present two characters who were on completely different sides of the political spectrum....who had very differing beliefs and yet also had an instant chemistry with each other,” Gunn said.

Adebayo is disgusted by many of Peacemaker's beliefs but sees the sadness of the guy underneath.

“That kindness is what, you know, what we could really use more of in the world. And so that's what interested me,” he said.

The story of redemption is one that doesn't escape Gunn. No stranger to controversy, he was fired from the “Guardians of the Galaxy” franchise after some questionable tweets resurfaced. But after an outpouring of support, Gunn was rehired and continued with the franchise.

“There is a lack of kindness in the world, and that somehow, people think that the way to change people's minds is to yell at each other on Twitter over what they believe. And that only makes things more extreme. They are in fact, serving the radical beliefs that they are so wholeheartedly against with the yelling,” Gunn said.

He added: “The biggest problem ... today is us dehumanizing the people that disagree with us,” and “that's on all sides of politics.”

But that line stops at Auggie Smith, the white racist father of Peacemaker.

“Peacemaker is a different story. He's not Smith. He's not purposefully wanting to murder certain portions of the population,' Gunn said.

“This is obviously a very abusive father who blames Chris for the death of his other son so there's some favoritism things there,” Patrick said. “He's just a horrible man. Not the kind of dad you want which is, I think, the point.”