Ryan Gosling on leaping into the life of astronaut Neil Armstrong 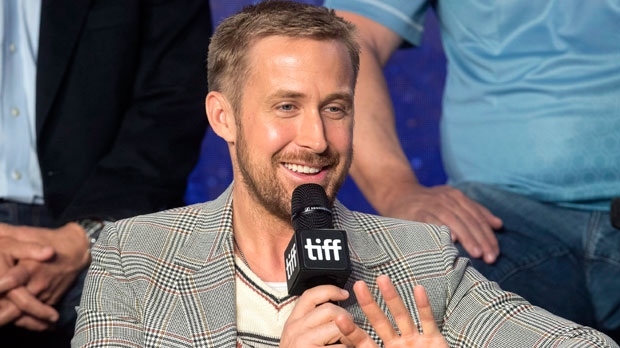 TORONTO - Ryan Gosling says he struggled to connect to the remarkable life of astronaut Neil Armstrong as he prepared for the historical drama "First Man."

But he finally found a way in through an unlikely source -- the eerie, other-worldly sound of the theremin, a musical instrument beloved by Armstrong.

The London, Ont.-born movie star elicited chuckles from a press conference at the Toronto International Film Festival when he recounted discovering a favourite song of Armstrong's that featured the unusual-sounding instrument.

Gosling says it was hard to relate to Armstrong's genius, courage and humility but when he went looking for things they had in common -- there was the theremin.

Gosling is drawing raves for his portrayal of the taciturn astronaut in "First Man," which reunites him with his "La La Land" director Damien Chazelle.

Also on hand were Armstrong's sons Rick and Mark Armstrong, who said they were impressed by the authentic portrayal of their father and family.

Their mother Janet, portrayed in the film by Foy, died just a few months ago.

Chazelle says he originally pitched the film as a "mission movie" about the eight-year span from the moment President John F. Kennedy vowed to reach the moon, to the moment Armstrong set foot there in July 1969.

But he soon recognized that grief was a personal catalyst for Armstrong, noting that his young daughter died in the early 1960's.

Chazelle says the moon landing is such a hard-to-fathom event you wind up turning to mythology to process it.

He says there's just something about the idea of someone who loses someone he loves and travels where humans, mortals, aren't supposed to travel -- basically travels beyond the beyond.