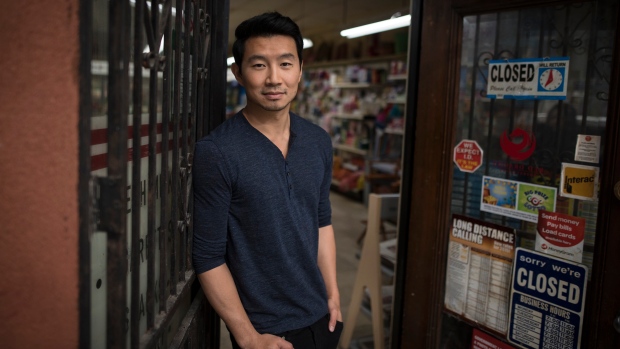 Actor Simu Liu of Kim's Convenience, poses for a photograph on set following an interview in Toronto on Wednesday, July 24, 2019. THE CANADIAN PRESS/Tijana Martin

TORONTO - “Kim's Convenience” star Simu Liu says he's not out to end anyone's career with his criticism of what went on behind the scenes of the now-defunct CBC series.

But the Toronto-raised actor says there's a lesson to be learned from the way the hit Korean-Canadian family comedy ended and his experiences on set.

The star of Marvel's upcoming film “Shang-Chi and the Legend of the Ten Rings” addressed the situation in a virtual chat with musician and actor Sook-Yin Lee at the Banff World Media Festival.

He was following up on his Facebook post earlier this month in which he decried a lack of East Asian and female representation in the show's writers' room.

Liu is among several cast members to speak publicly about being unhappy with the way producers ended the show after its fifth season because co-creators Ins Choi and Kevin White were moving on to pursue other projects.

That includes co-star Paul Sun-Hyung Lee, and Jean Yoon who recently took to Twitter to say that a lack of Asian female writers made her experience working on the show “painful.”

A representative for the show said Wednesday “the producers don't have any further comments at this time.”

Liu also said the show had an “overwhelmingly white” team of producers who shut out creative input from the cast of Asian Canadians.

Liu acknowledged creative differences can exist on any show but said he was upset about the way producers cancelled “Kim's Convenience” - a show lauded for its cultural representation.

“To see such a Canadian success story snuffed out in such an anticlimactic and almost pathetic kind of way, it did not befit a show of that calibre and of that social reach and social quality,” Liu told Lee in Wednesday's Banff chat.

“It really got me thinking about the importance of representation. And when I say representation, I mean so much more than what you see on the surface in front of the screen. I think it is so important to have voices in the decision-making process that are sensitive to the groups that your show or your production represents.

“In the case of 'Kim's Convenience,' that was Korean Canadians, that was East Asian Canadians, and we rightly felt like we didn't have that voice in the writers' room or at the creators' table.”

Actors consider themselves stewards of character, added Liu, who played son Jung on the show, alongside Lee as patriarch Appa, Yoon as matriarch Umma and Andrea Bang as daughter Janet.

“We really care about taking a character from point A to point B, figuring out what that character's journey is and presenting it to the audience, because that's what makes compelling storytelling, is the characters,” he said.

“I have always thought that our relationship should be a harmonious one with the writers but in this particular situation it wasn't.”

Liu's chat with Lee touched on a variety of topics, including using his platform to address social justice issues including inclusion and representation in media, which he's doing with the Made/Nous “Seek More” campaign. They also talked about the risk of succumbing to stereotype when white and non-Asian writers craft Asian characters.

Liu said it wasn't his intention to come across as hostile or incendiary with his Facebook post, which also said he was growing increasingly frustrated with the way he was treated and his character was portrayed.

But ultimately his experiences speak to a bigger issue about the “relationship between those with power and those without, and how do people with power kind of hoard that power instead of diversifying it when it could make a project better,” he said.

“I just hope that there's a lesson to be learned at the end of all of this for everybody moving on into the future, because this is the show that deserved better and unfortunately it's too late for us,” Liu said.