Taika Waititi takes a hammer to Thor in 'Love & Thunder' 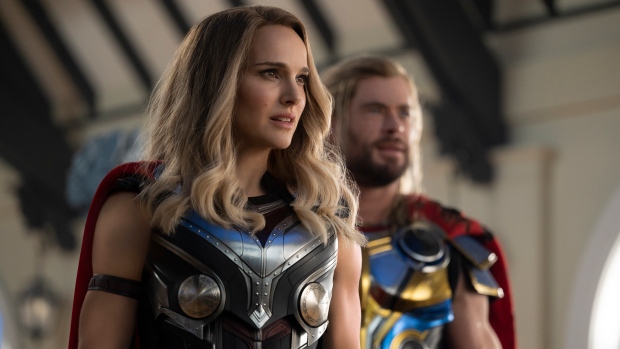 This image released by Marvel Studios shows Natalie Portman, left, and Chris Hemsworth in a scene from "Thor: Love and Thunder." (Jasin Boland/Marvel Studios-Disney via AP)

NEW YORK (AP) - To a large degree, modern blockbuster moviemaking has depended on the appeasement of fans to keep franchise juggernauts smoothly humming. But in making “Thor: Love and Thunder,” Taika Waititi had no interest in that. He approached the film from the opposite direction. What would actually make fans angry?

“I wanted to show him in a light that most Thor fans wouldn't really want if you were to tell them,” Waititi says. “If you were to say them: `Yeah, I'm going to make Thor in love,' it's probably the last thing that a Thor fan really wants to hear.”

“Thor: Love and Thunder,” which opens Thursday, is Marvel's fourth Thor movie and Waititi's second after the 2017 smash success “Thor Ragnarok.” That film, a hit with fans and critics, reinvented Chris Hemsworth's god of thunder and introduced a looser, idiosyncratic tone to Marvel's most monolithic hero.

But if “Ragnarok” was Waititi's version of a Marvel movie, “Love and Thunder” might simply be a Taika Waititi movie, without equivocation. Of the 29 films thus far in the Marvel cinematic universe, none may be so distinctively the work of its filmmaker.

In “Love and Thunder” there are things that usually never enter the MCU, like kids and cancer. It's scruffy, unruly and surprisingly human-scaled. Manly valor is mostly a joke. Thor isn't even really Thor. His hammer, Mjolnir, has transformed Natalie Portman's Jane into the Mighty Thor. By the time Waititi gets finished with him, Thor's biggest battle is convincing a child to wear proper footwear before leaving home.

“For me, it's good to give the fans something they don't know that they want,” Waititi said in a recent interview by video conference from Los Angeles. “With `Ragnarok' especially, when I signed on, a lot of fans were freaked out by that. They were like, `Who is this guy? He's going to take our precious Thor and ruin it.' And I was like, `Yeah. Exactly. That's exactly my intention. And I'm going to make it better, you just don't know it yet.”'

When Waititi was handed the reins of “Ragnarok,” the 46-year-old New Zealand filmmaker was a less familiar figure to most Marvel fans - and the first Indigenous director to helm a major superhero movie. It was a massive leap in scale for Waititi, who after spending years painting in his late 20s turned to making comic independent films (“Boy,” “Hunt for the Wilderpeople”) with deadpan absurdity and freewheeling tonal shifts.

But since “Ragnarok,” Waititi has emerged as a Hollywood dynamo, in front of the camera and behind it, juggling several armfuls of big studio franchises and more offbeat projects. His “Jojo Rabbit,” a child's view of Nazi Germany in which Waititi played an imaginary Hitler, received six Oscar nominations in 2020. (Waititi won for adapted screenplay). He has another film for Searchlight Pictures, “Next Goal Wins,” upcoming, as well as two Willy Wonka series for Netflix, a “Flash Gordon” film for Disney's 20th Century Studios, a “Time Bandits” series for Apple TV+ and a “Star Wars” movie he expects to soon write.

Hollywood has pushed just about whatever intellectual property it can find at Waititi, eager for him to dismantle it.

“It surprises me in that I never wanted to. I always wanted to make smaller things just with my friends,” says Waititi. “The idea of working with a studio never appealed to me. Then I worked with Marvel and I realized, well, there are ways you can work with studios where it doesn't have to be painful.”

“My job is to go in and have as many ideas as I can and not think about the consequences too much, and let them keep me in the Marvel lane,” Waititi adds. “It's not my job to go and watch every single film or read every single comic book. I'm sure that's contrary to what a lot of people think a filmmaker should be doing.”

It's a somewhat ironic development for a filmmaker who, as an actor in last year's “Free Guy,” parodied business-driven demands for sequels and who once cringed at the thought of spending long months in post-production at Marvel Studios in Burbank, California.

“It's more just the idea of Burbank as a place,” Waititi clarifies. “Going out there is fine if you sort of close your eyes and ignore the fact that you're in Burbank and eating Burbank food for lunch.”

But how much of Waititi's anarchic spirit can Hollywood's biggest franchises stomach? “Ragnarok” grossed $850 million worldwide, and expectations are similar for “Love and Thunder.” His ability to connect with mass audiences - despite his best efforts to subvert expectations - is surpassed by few current filmmakers. Yet something like “Star Wars” has been particularly resistant to comic tweaks of tone - something Waititi is keenly aware of.

“It has to feel authentic to my tone,” he says of the “Star Wars” film first announced two years ago. “I wouldn't say any of my films are just comedies. I've never made a broad comedy. I've never made something that's all jokes. It always has something that's resonant or taps into some human problem. They're all about family. They're all about (expletive) up families. I don't believe that blood makes you family at all.”

“Families are just a mishmash of people who somehow gravitate toward each other,” adds Waititi who was raised by a Jewish mother, a largely absent Maori father (they separated when Waititi was 5) and a wide range of relatives. “My family is so gigantic. It's thousands of people.”

That includes collaborators like Jemaine Clement (with whom Waititi made “What We Do in the Shadows”), Rhys Darby (currently paired together in the HBO Max series “Our Flag Means Death”) and many others. Another is Sterlin Harjo, whom Waititi met on the festival circuit years ago, where they bonded as Native artists with a similar sense of humor. Waititi helped Harjo get his acclaimed FX series “Reservation Dogs,” about four Native American teenagers in Oklahoma, off the ground.

“The way Taika directs, the way that he does things, it's about spontaneity,” say Harjo, who next month will debut the series' second season. “It's about the magic trick of it all. Having everything going at once is where the creativity lies for him. It's like he's operating at this level where he has to have it all buzzing.”

The love of “Love and Thunder,” which Waititi co-wrote, most directly applies to relationship between Thor and Jane, but it also relates to other aspects of the “Thor” sequel, including Christian Bale's grieving villain and the kidnapped children who play increasingly central roles in the film. Waititi, who has two daughters with the film producer Chelsea Winstanley (they separated in 2018), relied on his kids and others to help design the monsters in the movie. Children of Hemsworth, Bale and Portman all appear in the film.

“It's nepotism at its very best,” says Waititi. “And why not? It's a film about parenting and putting someone else before yourself.”

The primacy of kids in “Thor: Love and Thunder” is also very much in line with Waititi's other films. “Boy” was loosely based on his own 1980s childhood growing up in Waihau Bay. His first short, the Oscar-nominated “Two Cars, One Night,” is about a girl and a boy who become friends while waiting for their parents in a parking lot outside a pub. The kid army that helps save the day in “Love and Thunder” is just the latest uprising in Waititi's ongoing war against adulthood. In the end, even Thor was no match.

New Zealand director Taika Waititi poses for a photo with his daughters Matewa Kiritapu and Te Hinekahu during a red carpet event for the movie premiere of "Thor: Love and Thunder" at the Entertainment Quarter in Sydney,Australia, Monday, June 27, 2022.(AP Photo/Mark Baker)