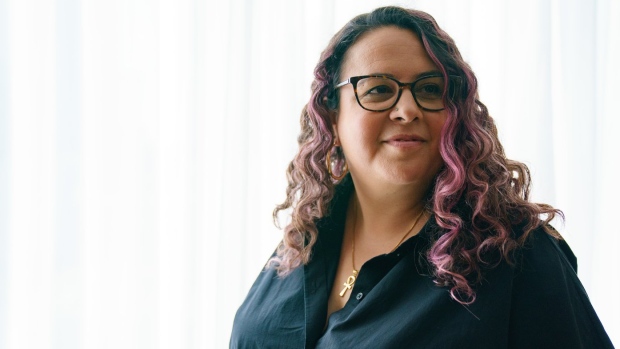 Sally El Hosaini, director of the film "The Swimmers," is photographed in Toronto, Saturday, Sept. 10, 2022. THE CANADIAN PRESS/Alex Lupul

Their passage had up to that point been harrowing but optimistic — fleeing from a war-torn Syria to the Turkish coast, where they would cram into a packed dinghy boat with other refugees towards eastern Europe, through Greece. It isn't until the ocean water begins to trickle into the dinghy boat that spirits begin to change.

Almost every frame of this scene, all of it shot on the Turkish Aegean coast, is intended to match the real-life event the Mardini sisters shared, said El Hosaini about the film, which streams Wednesday on Netflix.

“Even when we were wrecking, we saw dinghies full of people trying to cross, the coast guard ships chasing them,” El Hosaini said in an interview after the film's premiere on the opening night of the Toronto International Film Festival.

“We were at the mercy of the elements, and all the actors vomiting — that’s them vomiting for real. That was based very much on the reality of what happened on that boat.”

Written by Jack Throne ("Enola Holmes," "Wonder") and directed by El Hosaini, “The Swimmers" tells the true story of how Sara and Yusra fled their home in Damascus due to the Syrian civil war in 2015. When their crammed dinghy breaks down, the two sisters, experienced swimmers who had been taking lessons their whole lives from their father and coach, attach themselves to the boat and swim, guiding everyone on a three-hour trip to safety.

Their harrowing story comes to the public's attention after they settle in Berlin and Yusra joins a swimming club near their refugee centre, later becoming a candidate to compete in the 2016 Olympics in Rio as part of the Refugee Olympic Team, established in 2015 to allow displaced athletes to compete.

The Welsh-Egyptian director El Hosaini, whose other films include 2012’s acclaimed “My Brother the Devil,” was acutely aware of the responsibility of telling a story that wasn’t her own: a refugee tale that in many ways mirrors a manifold of similar stories.

“Growing up in Egypt, I’m never fully Egyptian — I always have that other thing that makes me not quite belong,” says El Hosaini.

“Moving to the U.K., I’m not a British person, so I’ve always felt like an outsider throughout my life, and never quite being one thing or another, I suppose that’s given me empathy for people who are also outsiders.”

For El Hosaini, it was no accident that in the casting for “The Swimmers,” she picked Manal and Nathalie Issa who were both Lebanese actors, native Arabic speakers, but most importantly, real-life sisters.

El Hosaini says that capturing a genuine emotional connection was considered in each frame of the film, showing the love between siblings. In one scene, the sisters dance joyfully to the tunes of David Guetta on a neon-lit rooftop in Damascus. In another, they share the pain when saying goodbye to their families.

“For me, empathy is so much more powerful than sympathy, and sometimes, I feel like the refugee narrative has to be a tragedy, and that, in a way, removes you from it,” says El Hosaini.

“It’s interesting, because you go to any big city in the Middle East and it doesn’t have a beige palette, yet in cinema, all of the middle east is beige. Everything is seen as ‘other’ and we’re used to seeing these images -- we are comfortable when we think they’re an ‘other.’”

El Hosaini says that when the Mardini sisters saw the movie, they were delighted in seeing the dance scene, because it’s what Syria truly felt like to them. Missiles were dropping, but happiness still found ways to flourish within their lives.

These partial stretches of jubilance transformed an otherwise perilous journey into an uplifting underdog sports movie, which was a welcoming arc for El Hosaini.

“What’s uncomfortable is when you realize those girls had iPhones and when you realize they were watching 'American Idol,'” says El Hosaini who asked the Mardini sisters for their playlists to get a sense of what spoke to them — artist Sia was at the top.

“It’s when you realize the way human beings get through the hardest times: with humour and laughter. That’s their personalities with just five minutes with them.”

El Hosaini adds that meeting the Mardini sisters reminded her of when she was younger, and that she made the movie she would have wanted to see at the age of 17, growing up in Egypt.

“It’s those experiences that make you think about borders and think about the privilege of having a little red piece of paper, a little red book, a little passport,” says El Hosaini, whose mother chose to travel back to the U.K. to give birth to them for the main purpose of citizenship — an act she recognizes that many aren’t favoured with.

“I’m very privileged that I was born with a British passport. That’s something I know I’ve benefited from.