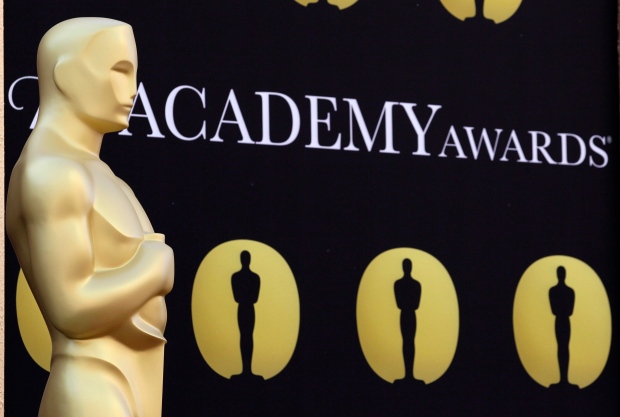 In this March 5, 2010 file photo, an Oscar statue stands on the red carpet outside the 82nd Academy Awards in Los Angeles. (AP Photo/Amy Sancetta, file)

TORONTO -- Toronto-raised sound engineer Andy Koyama's road to the Oscars began as a child in his mother's basement with a guitar, makeshift drums and dreams of shredding in stadiums.

"I used to play in a band, play guitar and from a very early age just loved, loved rock music and dreamt of being a rock star -- and that didn't quiet ever pan out," Koyama, an Oscar nominee for sound mixing on "Lone Survivor," said in a recent telephone interview.

"I was always very technical and I loved recording," he continued from Los Angeles. "I just had a machine that I recorded in the basement of my mom's house and slowly learned how to do sound engineering."

That machine was a four-track cassette recorder -- a high-tech item compared to what his band used in place of drums.

"We made drums out of Kleenex boxes," he recalled with a laugh. "It was before the advent of reasonably priced drum machines, so we had to try to figure out how to make drum sounds somehow."

Koyama, 51, went on to study engineering physics at the University of Toronto.

The rock world came calling, though, and he left without graduating to play guitar in Four on the Floor, a roots-rock band he describes as "Lone Justice meets R.E.M." They even had a video on MuchMusic in the mid-'80s, "but it never amounted to anything," he said.

It may not have amounted to anything on the charts, but it did lead to jobs at music studios and a Toronto post-production facility called Film House, where he lined up tape machines and went "from getting people coffee all the way up."

It was in 2000, when Koyama was working at Deluxe sound facility in Toronto, that he got a phone call asking him to go to L.A. to interview at Universal Studios.

"I jumped at the chance, and I don't miss the winter, I hate to say," he said, laughing, as he drove his car along Santa Monica Blvd.

Koyama has since gone on to work as a sound re-recording mixer on more than 75 features, landing positions at various studios (the latest being Formosa Group) and developing close relationships with directors including Jay Roach.

"There are a lot of Canadians in the business down here," he said. "When I first started during the '80s and the '90s, Toronto was very, very busy with production and post-production, I think because of the value of the dollar.

"So there was a lot of work when I first started and I think that helped me."

As Koyama describes it, sound mixing involves blending a film's dialogue, music and sound effects together. It's generally the last thing that happens on a film.

"Lone Survivor," a star-packed Afghanistan war drama directed and co-written by Peter Berg, presented a unique challenge because it required more "interpretive, suggestive" sounds than "you might ordinarily have in a war movie," he said.

For instance, they had to make a huge gun battle "sound powerful and exciting without being too loud and abrasive and shrill."

"And the director wanted the soundtrack to be very raw and visceral, and we went to great lengths trying to emulate what it would feel like to be those Navy SEALs in the battle," he added.

"Modern battle is very confusing and disorienting, so we used a lot of sound tricks to try to give the audience that experience."

Those tricks included creating "skittering and sliding and bouncing" noises the soldiers make as they jump off a mountain in order to escape the Taliban.

Koyama and his colleagues also acquired military and radio transmissions in order to recreate the radio communication that takes place between the soldiers.

It all combined for "an interesting experimental mix," said Koyama.

"It's not 'see a gun, hear a gun.' There are some other odd and strange and interesting things that sometimes are designed to disorient the audience in order to make them feel the chaos of what is going on with the soldiers afield."

Mark Wahlberg, one of the stars and producers, visited Koyama and his colleagues to play back the mix before they had finished.

"He said that he never really appreciated the sound mixing process of filmmaking until he became a producer and he was very complimentary," said Koyama.

Because Brownlow recorded the audio on set and Koyama works on the post-production end, the two have never met.

Koyama had "an idea" they stood a chance of getting an Oscar nomination this year because "war films tend to do well with the Academy" in their category, he said, noting the nomination still feels "a little surreal but it's very exciting."

Koyama has been to the Oscars once before, around 2002, but just as an Academy member in the audience.

For this trip, he's bought a new tuxedo and his wife has already bought her dress.

They only live about two kilometres away from the Dolby Theatre, where the Oscars will be held on Sunday.

The guests he'd most like to meet include Martin Scorsese and "Gravity" director Alfonso Cuaron.

"I'm excited but I'm nervous," said Koyama. "I hope I don't have to go up there and make a speech, but if I do that's a little bit terrifying."

The sound mixing category also includes teams behind "Captain Phillips," "Gravity," "The Hobbit: The Desolation of Smaug" and "Inside Llewyn Davis."

Koyama said he thinks "Gravity" is "probably the frontrunner to win."

But he has thought about what he'll say if he's called onstage.

"Firstly I just want to thank the men of Operation Red Wings, which is the 19 men who lost their lives during the mission which this film is about," he said.

"I want to dedicate it to them, if it does happen."