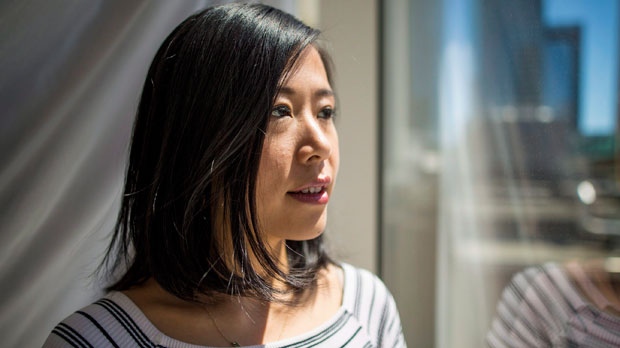 Domee Shi, director of the Pixar short film "Bao" poses for a photo at the Shangri La Hotel in Toronto on Monday, June 11, 2018. (THE CANADIAN PRESS/ Tijana Martin.)

Canadian animator Domee Shi, also believed to be among the youngest to helm a Pixar production, says it's all "amazing, very humbling, (and) awesome," to be the one to break so many barriers with her eight-minute film, "Bao."

"It's about time and I'm excited to be the first of hopefully many female directors," Shi says during a recent visit to Toronto to promote the film.

"It's been amazing how the studio has gotten behind the short and really supported it and supported me, and our producer Becky Neiman and all of the female leadership on this short and on 'Incredibles 2,' as well.

"It just feels like Pixar is really embracing and celebrating diverse storytellers and they really want to create a safe and awesome place for us to thrive."

In crafting "Bao," Shi mined her own experiences growing up as the only child of Chinese immigrants in Toronto.

The story revolves around an older Chinese woman who is astonished when one of her steamed dumplings springs to life as a plump and perky dumpling-shaped boy, but she quickly embraces the adorable creature as her baby.

Their escapades include trips downtown where the CN Tower looms overhead, shopping in Toronto's bustling Chinatown and riding the city's distinctive streetcars.

"My Chinese mom would be super over-protective of my growing up, she'd always treat me like a precious little dumpling, just making sure I was safe, that I never wandered away too far, that no one ever whisked me away," chuckles Shi, who was born in Chongqing, China and moved to Toronto when she was two.

"There's definitely a lot of me in this short and a lot of my mom in the mom character.... She's kind of a representation of all the strong Chinese women in my life."

But the Toronto setting wasn't always part of the plan. It only emerged when production designer Rona Liu asked where Shi wanted the story to be set.

"I was like, 'What about Toronto?' I thought it would be so cool to ground the short in a real location because I think that's what gives it that sense of realism, that sense of authenticity," she says.

"The characters in the world are very stylized and cartoony so you want those details to kind of make the story feel real and truthful and authentic."

Shi says she began pitching the story back in 2015, dropping ideas to acclaimed director Pete Docter while they worked together on the Oscar-winning feature "Inside Out." The 28-year-old now considers Docter a mentor, and a key advocate for establishing her burgeoning career at the studio.

Shi has certainly enjoyed a quick rise since nabbing an internship at Pixar during her graduating year at Sheridan College in 2011.

The internship led to a job as a story artist on "Inside Out," and from there she moved on to the feature films "The Good Dinosaur," this Friday's "Incredibles 2" and next year's "Toy Story 4."

"It's very unusual, especially when you talk to other people who work at Pixar -- their path to Pixar is very all-over-the-place," she admits.

Shi muses on a cultural sea change that seems to have hit home at Pixar, a studio rocked by misconduct complaints against its former creative titan John Lasseter, who announced last week he would leave the animation company he co-founded. In November, Lasseter acknowledged some "missteps" and apologized for behaviour that made staff feel "disrespected or uncomfortable."

Disney said Lasseter will stay on through the end of 2018 as a consultant.

She shies away from touching on reports of turmoil at the studio, focusing on its efforts to support new voices and reach new audiences.

Shi says she's now on track to direct her first feature-length film, which would be another benchmark if carried through.

The only other woman to helm a Pixar feature was Brenda Chapman, but her oversight on "Brave" was famously short-lived. Although the story originated with Chapman, she was taken off the project in 2011, and it was handed over to Mark Andrews. It was released with a shared directing credit.

Shi acknowledges that the animation world has been especially hard on women trying to make inroads, but insists Pixar is committed to changing that story.

"Animation is just becoming more and more of a female-dominated industry, which I'm really excited about."

"Bao" opens in theatres on Friday in front of "Incredibles 2."