Trump calls for Spicer votes on 'Dancing with the Stars' 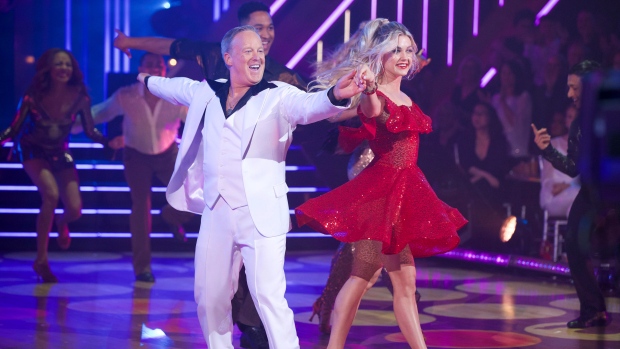 This Sept. 30, 2019 photo released by ABC shows former White House press secretary, Sean Spicer, left, and Lindsay Arnold during the celebrity dance competition series "Dancing With the Stars," in Los Angeles. President Donald Trump tweeted Monday, Oct. 14, that viewers should vote for Spicer. The president called hima “good guy” and wrote “he has always been there for us!” Spicer told USA Today there’s no question a “huge” amount of his votes come from Trump supporters. (Eric McCandless/ABC via AP)

LOS ANGELES - President Donald Trump is trying to influence votes on ABC's “Dancing with the Stars.”

Trump on Monday tweeted that viewers should vote for former White House press secretary Sean Spicer. The president called Spicer a “good guy” and wrote “he has always been there for us!”

Spicer tweeted his thanks with instructions on how viewers can cast votes.

Spicer has been paired with professional dancer Lindsay Arnold as they compete for the mirror ball trophy.

He says he's doing it “to have fun and make it a really good experience.”

Trump supporters have embraced Spicer, but opponents have criticized the program for inviting him.