What to stream in August: Sandra Oh faces the lows of higher learning in 'The Chair' 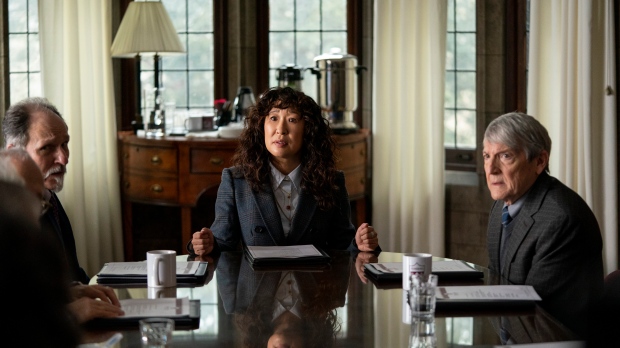 Ken Bolden as professor Plum, left to right, Sandra Oh as Ji-Yoon, and Mark Philip Stevenson as professor Pollack are seen in a publicity still handout photo on set of the show 'The Chair.' Oh faces controversy as the first female chair in the English department of a prestigious university in Netflix's 'The Chair.' THE CANADIAN PRESS/HO-Netflix, Eliza Morse

TORONTO - Social turmoil echoes through the halls of academia, while a journey back to Sesame Street offers some levity in August's streaming highlights.

Here's a look at TV series and films to add to your watchlist this month:

Dr. Ji-Yoon Kim (Canadian actress Sandra Oh) is the first woman to hold the reins as chair of Pembroke University's English department, but the celebration proves to be short-lived - she's barely finished unpacking her new office when controversy strikes. A viral video of one of the department's professors (Jay Duplass), someone who happens to be a close friend, shows him in a less-than-favourable light. Students are calling for him to be fired. Faced with pressures from above, and knowing she's one of the few staff members of colour, Kim faces the politics of a campus in disarray where issues of race, age and gender have gone unaddressed for so long they're bound to combust. “The Chair” is a six-episode series. (Netflix, Aug. 20)

“Street Gang: How We Got to Sesame Street”

Several documentaries have profiled the most iconic “Sesame Street” characters, but none have taken a big bird's-eye view on the legacy of the children's television program. “Street Gang” finds its loving centre by reflecting on how the project grew from an upstart toa phenomenon. There is unseen footage, revealing stories from the television studio floor and memories shared by the people who were there from Day One. For anyone who grew up with Jim Henson's characters, revisiting an era that seemed so hopeful is almost certain to evoke some childhood memories. (Crave/HBO, Aug. 2)

Local TV news is known for its occasional eccentricities, but the team at KPVM-TV in Pahrump, Nev. has got the competition beat on the weirdness scale. The weatherman dresses like Elvis Presley, the lead anchors spout some truly questionable jokes live on air, and the station's owner is nothing short of a Donald Trump fanboy. It's this only-in-America setting where HBO's latest docuseries finds a balance between celebrating the adversity of its steadfast reporters and revealing the follies of a small-town station with some sizable problems. The six-part series will release two half-hour episodes each week. (Crave/HBO, Aug. 2)

Life is complicated for teenager Ruby (Emilia Jones) who's grown up as the only hearing member in a deaf family. She interprets for her parents (Marlee Matlin and Troy Kotsur) and works on the family's fishing boat every day before school. But life takes aturn after she joins a choir and winds up being encouraged by her mentor to apply for a prestigious singing school. Named after the acronym used to describe aChild of Deaf Adults, “Coda” is a heart-warming, music-filled story that almost guarantees you'll shed a few tears. The film won four awards at the 2021 Sundance Film Festival, including the audience award and the grand jury prize. (Apple TV Plus, Aug. 13)

“The Kissing Booth 3” - The tribulations of Elle Evans (Joey King) continue as she sets her sights on college. (Netflix, Aug. 11)

“Godzilla vs. Kong” - Made for the big-screen, but hardly shown in Canadian theatres due to COVID-19 lockdown measures, the epic faceoff between monster mights arrives in a shrunken-down scale at home. (Crave/HBO, Aug. 20)

Netflix delivers the third and supposedly final season of “Manifest,” the airline mystery that became one of the year's buzziest shows after it was cancelled by NBC (Aug. 31), while Apple TV Plus ventures into a new world in the second season of Jason Momoa's apocalyptic “See” (Aug, 27, episodes weekly). Basic tier Crave stocks up on new weekly episodes of lesbian drama “The L Word: Generation Q” (Aug. 8), animated comedy “Star Trek: Lower Decks” (Aug. 12) and queer relationship comedy “Work in Progress” (Aug. 22).