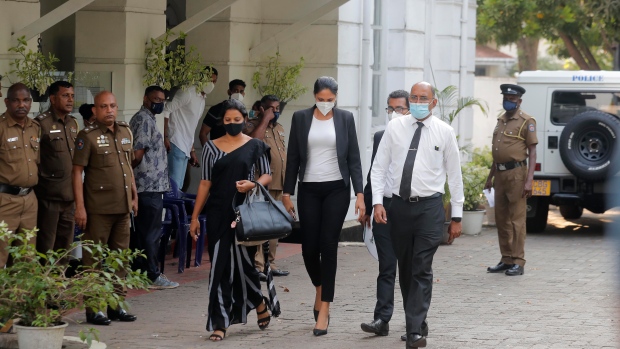 Mrs. World 2020 Caroline Jurie, center, leaves a police station after obtaining bail in Colombo, Sri Lanka, Thursday, April 8, 2021. Jurie's decision to remove the crown from the the winning Mrs. Sri Lanka contestant on stage moments after the winner was announced, because of claims she was a divorcee, drew widespread social media condemnation. The winner Pushpika de Silva who was crowned again later had complained to police that her head was wounded when the clips of her crown were removed by Jurie. (AP Photo/Eranga Jayawardena)

COLOMBO, Sri Lanka - The reigning Mrs. World has relinquished her title while defending her decision to pull the crown off the head of this year's Mrs. Sri Lanka title holder.

She claimed the other woman was unqualified to take part in the contest because she is divorced.

Caroline Jurie, the winner of Mrs. World 2020, has been accused of injuring Pushpika De Silva, who was crowned Mrs. Sri Lanka on Sunday at a televised pageant in Colombo.

Jurie was arrested on Thursday and later released on bail.

In a statement Friday, Jurie said she stood against “injustice” and said the pageant was “tainted.”

Jurie added she wanted to ensure that every contestant had an equal opportunity, because she had seen “from the beginning” that the contest was corrupted.

She stressed she did not favour anyone.

At the end of the video, she said “I am now ready to hand over the crown” and then removed it from her head.

Following Sunday's bust-up, De Silva clarified that she is separated, but not divorced, from her husband.

In a statement on Facebook, De Silva said: “Being apart is one. Divorce is something else. I'm still an un-divorced woman.”