Museum of Broken Relationships to showcase heartbreak at Harbourfront Centre 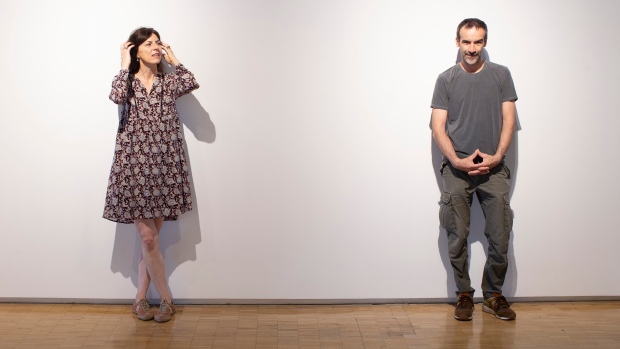 The gift from her ex had become a symbol of Punjani's past loves and the pain that followed, and the 32-year-old Montreal graduate student knew she needed to let go of the item in order to unburden herself of the romantic baggage it carried.

Punjani couldn't fathom who would want such an article of pain, nor was she ready to consign it to the trash heap.

So she decided to donate the scarf to the Museum of Broken Relationships, where it will be displayed alongside other artifacts of heartbreak in a Toronto exhibition opening Saturday.

"This is a perfect place to still honour the memories, but also get the scarf the hell out of my house," Punjani said.

The Harbourfront Centre marks the 53rd stop in the Museum of Broken Relationships' worldwide showcase of the mementos and memories that are left behind when love ends, organizers say.

The show will feature highlights from the museum's permanent collection in Zagreb, Croatia, as well as about 10 new contributions from lovelorn Canadians.

These local donations may not seem like much at first glance, but their stories run the emotional gamut from fury to forgiveness.

A comb represents a bitter entanglement with a hair-obsessed ex-partner. A hand-drawn treasure map tracks an online romance that took a turn for the worse. A red-eyed toy rabbit evokes the searing glare of strangers witnessing a couple's public argument.

The first-person testimonials that accompany each of the objects detail not only failed romance, but the passion that preceded it. In this sense, co-founders Olinka Vistica and Drazen Grubisic like to say the museum is about love, but turned "upside-down."

The trove of once-treasured keepsakes traces its origins back to the Croatian artists' own breakup in the mid-2000s.

The former couple longed for a place where the sentiments and stories of their years-long relationship could be preserved. And over time, the personal project evolved into a public space where the private grief of heartbreak can be shared with strangers, Vistica said.

"When a relationship is over, there is a remembrance. There are people who can connect with it, empathize, identify with the story," she said.

"In a way, it stops being your personal experience, but it becomes a human experience."

All donations made to the museum are exhibited anonymously, and the stories of severed connections can span failed romance, betrayals of friendship or even the death of a loved one.

As the museum travelled across the globe, Vistica said the crowdsourced collection came to resemble an "anthropological study of modern love."

Even with a limited sample size, one can learn a lot about a place's character through its personal relics, she said.

Between curating a 2015 show in Whitehorse and the upcoming Toronto exhibition, Vistica has noticed the vast expanse of Canada lends itself to long-distance relationships, and a disproportionate number of donations involve warm apparel.

Both these elements are true of Punjani's scarf, which bears the love and loss of two relationships -- one that pushed her to pursue her passions, the other that forced her to recognize her own resilience.

Punjani met her first love in Ethiopia, where he helped her realize she was an artist, which was "the biggest gift he could have given me."

But the scarf was the last present he gave her -- on the day their engagement ended. While pursuing her studies in Montreal, Punjani drained her bank account to meet up with her then-fiance in Sri Lanka, only to find out he was cheating on her.

The two parted on amicable terms. And a couple years later, Punjani started seeing someone else, and he would borrow the scarf as a regular part of his wardrobe.

After that relationship ended painfully, Punjani tried to reclaim the scarf as her own. But every time she wrapped it around her neck, she felt her temperature rise and throat swell, as if she were having an emotional allergic reaction.

Punjani believes in "recycling love," and by putting the scarf on display, she hopes this token of pain will be restored as a symbol of mutual support.

"The fact that it's part of this Museum of Broken Relationships feels like this collective way of moving forward," Punjani said. "It validates those feelings of loss and pain, but together."

The Museum of Broken Relationships runs at the Harbourfront Centre from June 29 to Sept. 8.