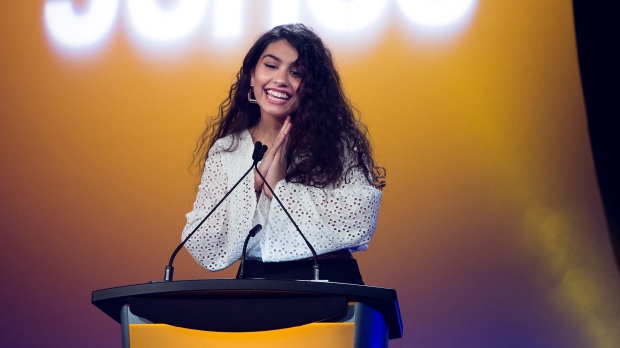 Canadian singer-songwriter Alessia Cara speaks as she's announced as the new host for the Junos during the 2020 Juno Award nominee press conference in Toronto on Tuesday, January 28, 2020. THE CANADIAN PRESS/Nathan Denette

TORONTO - Alessia Cara emerged the top winner at this year's Juno Awards, scooping up three trophies in a pre-recorded ceremony that paired celebration with an acknowledgment that more needs to be done to represent the diverse voices of Canadian artists.

While the Junos usually mark the biggest night for the country's music industry, the Monday event, which streamed online, took on a noticeably different tone in isolation. Missing were those euphoric acceptance speeches inside a massive venue filled with adoring fans, replaced with a handful of intimate performances and some serious reflection on the future.

Running a bit over 90 minutes, the Junos were handed out at historic speed, with 42 categories announced by presenters that included “Stranger Things” actor Finn Wolfhard and singer Jessie Reyez, who also pocketed her third career Juno during the event.

But it was the 23-year-old Cara who shone brightest as her deeply personal 2018 “The Pains of Growing” picked up both album and pop album of the year, while she also won songwriter of the year for her work on several of its tracks.

It was an uplifting finish for the Brampton, Ont.-raised pop singer after her dreams of hosting the awards show were dashed in the wake of COVID-19. She was originally lined up to be MC for the televised event in Saskatoon last March before organizers pulled the plug in response to the pandemic.

Cara was quick to jump onto Twitter after she came out on top, posting a characteristically humble “um whaaaaaaat” before retweeting congratulatory messages from a couple of her followers.

Aside from the big wins, Monday's ceremony took on a sense of social urgency as greater awareness surrounding representation of Black, Indigenous and other artists of colour became a topic some of the presenters addressed.

CBC Radio host Odario Williams, who's also a member of hip-hop collective Grand Analog, opened the show with a candid acknowledgment of the many shortfalls of Juno Awards past.

He noted that it took 15 years after the first ceremony in 1970 before soul and reggae artists were included in the list of categories, while it wasn't until 1991 when the first rap recording award was given to Maestro Fresh Wes.

“I've got to give a shout out to the Black and Indigenous Canadian artists of the '70s, the '80s, the '90s that are true pioneers in the growth of our musical landscape,” he said, pointing to Liberty Silver, who was the first Black woman to win a Juno in 1985.

While Juno organizers have made efforts to improve diversity among its nominees in recent years, president Allan Reid recognized that much work still needs to be done.

“We are committed to the long-term inclusion and amplification of Black voices and a more equitable industry for all,” he said at the outset of the show.

“We are working on an action plan with specific commitments that we will reveal this July. We must do better for our BIPOC members of the music community, and we welcome you to hold us accountable.”

A number of the night's music performances also put the subject of racism in Canada at the forefront.

Halifax alt-pop duo Neon Dreams, who were selected as breakthrough group this year, gave a sombre performance of “We Were Kings.” The coming-of-age reflection was co-written by lead singer Frank Kadillac about his own experiences rising above stereotypes, racism and high school bullying.

Other highlights included two-time winner Shawn Mendes, who was selected as artist of the year. “Senorita,” his duet with girlfriend Camila Cabello, won single of the year, making him the first artist to pick up that award for three consecutive years.

Breakthrough artist went to Oshawa, Ont.-born pop singer Lennon Stella, who's already established herself as an actress on the primetime musical-drama series “Nashville.”

Avril Lavigne pocketed the fan choice award, which is voted on by viewers, for the second year in a row, and the third time in her career.

Among this year's most surprising winners is Governor General Julie Payette, who's a member of the Ottawa Bach Choir that won best classical album, vocal or choral.

Bryan Adams' “Shine a Light” won adult contemporary album, giving the musician his 17th Juno win and putting him behind only Celine Dion and Anne Murray as the artist with the most Junos.